The Story of a Fox

We are presently house-sitting for friends, whose homes are on the west side of San Juan Island. We've stayed in this locale before, for our longest-held-San Juan Island friend. We expected grand sunrises and sunsets, watching ships out on the Strait, and bird watching.

We NEVER expected the sight we saw yesterday.

Luckily, both Al and I were standing at the kitchen sink when I looked out the window and didn't recognize what I saw. 'WHAT is THAT?!' It looked like a rather large dog nosing around under the bushes. I looked to the road, thinking to see a neighbor out for a walk, even though it was snowing and had been all day. But there was no human in sight. Hmm.

OH! It's got a big bushy TAIL! But I was confused. I know there are red fox on the island, especially on the southern end, but this was BIG, and BLACK! I ran for my camera.

Al saw him and said 'He's caught something! I think it's a bunny!' We saw him toss it in the air, and then begin munching. 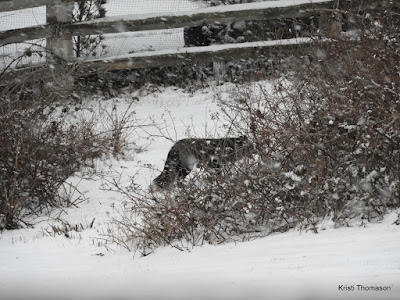 Al was now watching through binoculars. Gosh he looks big.

He trotted up toward the house, and we thought he was going under the deck, but he came out on the west end of the house and made a beeline for some low bushes, deeply covered in snow. 'He's burying it! Look at that!'