Viking Star had an appointment at the spa!

We pick up Michael at the bus station, and Troy and I set out with the rental car for Hillsboro.  I have brought the camera with me, but I've been so busy with grandkids and friend visits that I have only taken a couple of shots.  I ALMOST regret taking the camera with me, and I DO regret that there aren't photos of the work done over the next 5 days.  There was a VERY hot weekend where work was done early in the morning, stopped mid-day, and Al and Michael did what they could to escape the heat.

She's back in the water on schedule, and Al and Michael are cruising the Sound.  I hear she looks great!

The oldest grandchild came to spend a week with us. I think a good time was had by all! Troy basked in the attention of two adults not distracted by siblings.  Papa got to impart so much knowledge.  And Grammie got to take pictures!

Olympia is only a two-hour road trip, so a same-day turn-around is not out of the question.  Lindsay brought all four of her kids AND two daycare kids!  They had time to stretch their legs at the playground at Percival Landing, and here they are at the top of the tower at Port Plaza Park. 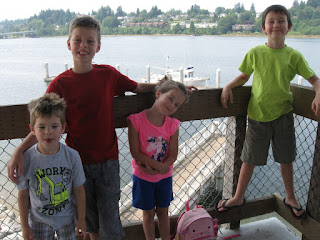 Troy was surprisingly uninterested in driving the boat, but he was excited for seafood harvest and consumption, and looked forward to dinghy trips.


Eating crab was a synchronized event! 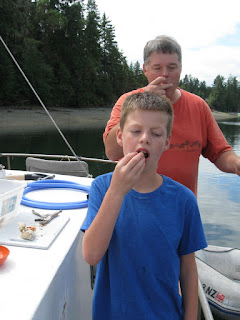 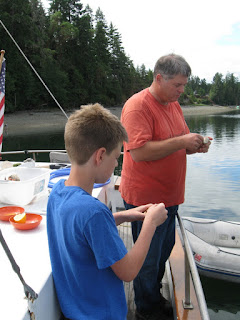 It was NOT a quiet week. He sings in the shower. Troy is very busy, though he did not get as grimy as we thought he might. And we don't know if the painful red spots on his left hand were mosquito bites or poison oak -- but they responded to hydrocortisone cream.  Troy wanted to stay longer, and at the very least wants to come back soon.  But we have 6 more grandkids waiting their turn.
Posted by Viking Star at 9:09 PM No comments:

We arrived at the dock at Port Plaza Park in Olympia this morning to rendezvous with daughter Lindsay and the passel of kids she was hauling so that the oldest grandson Troy could visit for a week.

While we were waiting for their arrival, we strolled through the farmer's market, and got a cup of coffee and some pastries from Batdorf and Bronson.  While we were gone, THIS group had gotten set up.  It looked like they were ready to start, so I grabbed the camera.

Posted by Viking Star at 5:06 PM No comments: 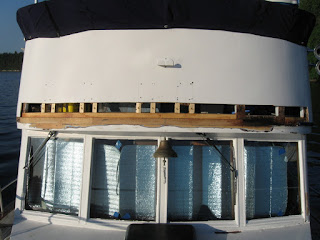 Taken 7-4-15.  You can see that the 'supports' have another block below them, and now have 'crutches'!  Also note the sun shades in the window.  I think the 4th of July was the hottest day of the year so far.  There wasn't a whole lot of working going on.  Besides, we had company. 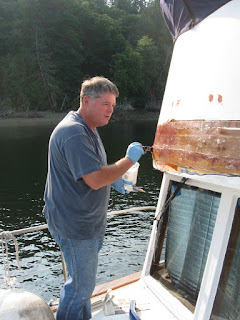 Taken today, 7-8-15.  I didn't think to take pictures until he got it all closed up and glassed over!  Just needs sanding and paint now.  Patience.....patience. 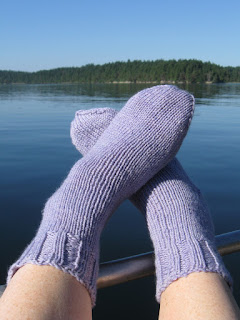 Taken 6-30-15.  My first pair of socks are completed, and they FIT!  There are mistakes, of course, but they were fun and I learned a lot.  I was amazed to finish the pair in 11 days.  I liked it so much, I made another visit to the yarn store and stocked up for 3 more pair, the first for Al. 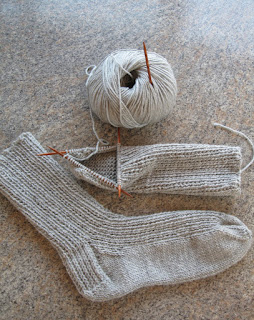 Begun the evening of July 1 -- one week of progress.  Al says it is too hot to model.

Posted by Viking Star at 6:11 PM No comments:

Every once in a while you meet people that you just 'click' with.

Just over a week ago, we hit the jackpot at Jarrell Cove.

We had planned to spend three nights there, hoping to get a spot on the 'short dock' -- we hoped to have better internet access there compared to the other dock.  But, that spot was already occupied, and it appeared a party was gathering on the long dock, so we grabbed a mooring buoy.

But on Saturday we noticed 'our spot' opened up!  So we moved on over.  (And no, the internet was not any better.) After we got there, we recognized the sailboat there by the people and dogs on it, most especially a 'tripod' dog.  We invited them over to share the shade that Viking Star cast on the dock on that warm afternoon, and we got to know Paul and Kris a little better, and Emma and Bentley.

Another couple rowed over from their sailboat later in the evening.  Sherlene was heading to the shower onshore, but we all became engrossed in conversation instead.  She and husband Kevin are just beginning their cruising adventures.  They are a trucker team for 6 months of the year, cruising the highways cross country.  And have now bought a sailboat and are cruising waterways for the other six months.  They are bloggers as well, and Sherlene is a fabulous photographer.  Check them out at https://svwingsofthemorning.wordpress.com/

There also was a group of sailors from the Portland OR area, members of Island Sailing Club!  Portland was our 'starting point'.

For this past 4th of July weekend, our friend Chris came up from Portland.  We met him several years ago at the Portland Blues Fest.  He used to live on his sailboat, mainly on the Willamette River, but recently it was stolen, and now his only boat is an inflatable kayak.  He brought it along and explored the shorelines of McMicken and Harstine Islands.  He and Al feasted on oysters and mussels, and we sent him home with clams and crab. 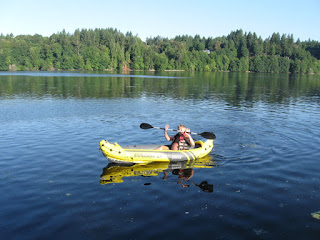 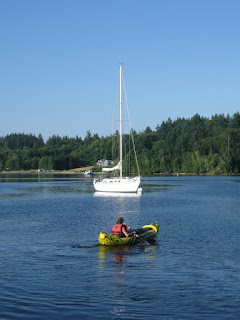 Posted by Viking Star at 1:13 PM No comments:

As Kristi and I travel around we at times get an opportunity to visit a local market, Farmers Market, Craft Market or such. We almost always enjoy our time at these, though it does seem more than a few have started to turn into a boutique event perhaps more suited for Big City type folks, or worse:  "Crap I purchased off of Ebay from China to offer for sale today."

There is however this one:
https://www.facebook.com/harstineislandfarmersmarket

Just a mile walk from Jarrell's Cove State Park - Kristi and I have been there three times this summer. Despite saying we wish we were losing a bit more weight, we always seem to end up with some type of baked good to enjoy with island roasted coffee, plus something to take back to the boat for later.

I have to say this Farmers Market is very nice.  Friendly folks, but more so:  the wide range of hand made items and the ingenuity shown is great.   Plus the prices are not in the 'Seattle Market' range :-)

We enjoy going here, and will likely return again.   I took a few photos of some of the vendors, and though it is perhaps a bit unfair to the rest here are three:

Held Saturdays in the summer from 10-noon at the community hall, we WILL be back.
https://www.facebook.com/harstineislandfarmersmarket

Every once and a while Kristi wonders where we might end up plopping down after we tire of this boating thing - to me, Harstine Island - and its market - has a nice feel to it.