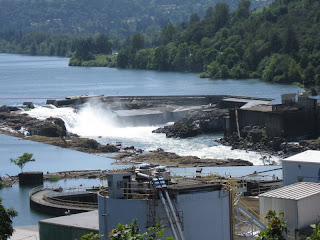 Nearly 139 years ago a ‘state of the art 4 chamber’ lock opened in the Willamette river allowing passage round the falls at Oregon City.  As is often with developments during that time, there was a bit of controversy with the construction of these locks – which seems to have been centered on one group's interest in overcoming the then stranglehold of the railroad (and an inefficient portage system) around the falls.  And that continued for many years after as different parties battled for control of the lucrative shipping in and out of the Willamette Valley.  You can read much more here:  willamettefalls.org/HisLocks

The Willamette Falls Locks was the first multi-stage lock in the USA, and at just only a month shy of 139 years,  is also the oldest operating multi-stage lock in the entire USA.  Or was.  Though they were re-opened during the summer of 2010, this year the locks were operated only once per month and allowed limited commercial traffic.

Last Friday the Army Corps of Engineers ceased that with the announcement of an ‘indefinite’ closure.

Despite over $2M in ‘stimulus’ money being spent to refurbish the gates themselves in 2009, other parts of the locks are in poor condition and time has just caught up” statesmanjournal.com/article/20111202/UPDATE/111202008/Locks-Willamette-Falls-out-commission

The Willamette Falls has an interesting history in the development of the west.  The initial government seat of the Oregon Territory.  Site of not only the nations 1st ‘long distance electric power system providing lighting to the streets of Portland Oregon 14 miles away.    Initially built using Edison’s DC design,  in 1890 a competing AC system from Westinghouse was brought online as the 1st AC power distribution system in the world.  (There is no evidence of Elephants dying as a result of this monumental event – will leave that one to the History Nerds among us).  Paper mills, Log Mills, Salmon Fishing.  Lots of activity has happened around these falls. 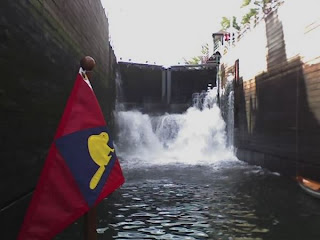 Kristi and I have been through the Locks several times over the years, and have enjoyed each trip.  The old locks are quite a contrast to the new ones we passed through on the Columbia and Snake.  In size, fill rate, and how you ‘fixed’ yourself during the ride up/down  (No floating bollards in the Oregon City locks, just hand lines passed down).  To be honest, this has the feeling of truly the end for these locks.  There is very limited commercial need for them anymore, and even recreational usage is limited as ‘safe’ navigation up the river ends not too far above the falls.  (One can actually navigate all the way to Salem Oregon, but it is tricky, requires good local knowledge and charts are published for only part of the way).  We made our passages to enjoy the locks, and the wonderful park at West Lynn mvvikingstar.blogspot.com/2010/05/where-did-you-come-from.html

Guess this is a Goodbye to the locks, we did enjoy them and are sorry to see them go – but also understand the realities.
Posted by Viking Star at 11:20 AM