Arduino, Alternators and Generators - An update on the 'family'

With the current break at hand I have been down in the Man Cave working more on my Arduino based controller for a DC generator.   I also finished pulling out the alternator regulator portion of that design into a standalone external regulator.  Over the past few months there has been a 'group buy' of both of projects and I thought I would post some photos.


First off, the External Alternator Regulator.


It does what most external regulators do, regulator voltages in a 3-step approach (Bulk, Acceptance, Float) to quickly and efficiently recharge a battery - specifically house storage batteries.  As also expected, temperature of the battery is monitored adjusting target voltages, and the alt temp is also monitored to protect the alternator.  Other features like soft raping, the ability to reduce alternator output (help prevent burning out small frame alternators), equalize mode, round out the 'as expected' features.  But these are available today, so why (outside of boredom) create yet another external regulator?  One simple reason:


Many  have had problems with existing external regulators in that they too quickly stop charging the battery - leave Acceptance phase early -  and hence chronically undercharging the house battery.

Not only do we not get the capacity of the battery, but repeated undercharging leads to shorter battery life.  Adding the ability to measure the current entering the battery allows this regulator to measure the batteries state of recharge (via its acceptance rate) and following battery manufactures charge profiles accurately determine when to exit Acceptance and move into float. Contrast this to regulators which use a fixed amount of time in Acceptance, or perhaps some function of the time spent in bulk - problematic to know the actual battery state of recharge, esp in a real world with other factors such as varying engine speed, and different house loads being applied randomly.


Another use of measuring amps can be to limit an alternators output, either to match the capability of the driving engine (ala, a small DC engine), or to protect the alternator.  Along the lines I added a few other capabilities:

Parts costs are under $100, add in $25 if you want the Bluetooth capability.   More details are here:  http://arduinoalternatorregulator.blogspot.com/


Next, the fully integrated DC generator engine and alternator controller

This is what started these whole open-source Arduino projects:  An integrated controller for our Kubota based DC generator / watermaker.   It started out as just the alternator regulator with the goal of better matching the power delivered to the capabilities of the small Kubota engine, but then grew into an integrated engine controller + alternator regulator.  Taking care of starting, monitoring, stopping the engine as well as adjusting the throttle / speed to match the needs of the alternators.  The controller can interface with an optional remote LCD display for nearly full automatic operation (no more into the rain to fire up the generator for me!).  It features the same technologies for the Alternator regulator as above, so all the above features (with the exception of the ASCII text configurations and Bluetooth) are here as well.  This is the 3rd revision of the controller board. 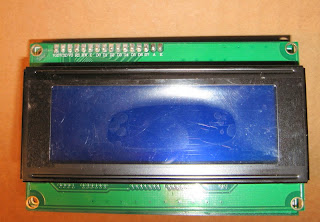 The system manages and monitors the generator.  It can be configured to turn itself off when the battery is fully recharged, includes a 'quite' mode - limiting RPMs when you don't want to upset the neighbors.  And a  built in RTC clock can be used to enable time/date based auto-starting, or blackout periods (time based code is not fully flushed out).   Fully customizable using the Arduino programming environment.  Want to add a feature to monitor outside temperature, and start the Generator when conditions fall below freezing to keep the generator house warm?  Maybe you are doing a co-gen project and want to be able to fire up the engine when hot-water is needed..   A expansion connector brings out unused ports and the I2C bus.   The sky is the limit.


Parts cost for the controller w/o heatsink and remote are around $150.  Controller will function w/o the remote if you wish just local switches to control things.  More on the integrated engine and alternator controller here: http://smartdcgenerator.blogspot.com/

Both of these projects are based upon the Arduino IDE, both are released using the CC 'open source' licensing agreement  for non-commercial use, and both are fully documented (source, design, parts list, etc) in their respective blogs.  Have just completed a group build of both the Alternator Regulators and the Controller sets to folks looking to install them.  I have had a lot of fun doing them, and do like to see others taking advantage of the work I have done.  As I am just wrapping up coordinating the group-buys, I am a bit behind in updating the two  web sites with details and documentation.  Will be working on that over the next few weeks.