Minstrel Island to the Octopus Islands


Port Harvey deserves more than a few words. George had some bad luck after last year's season, but he is working to rebuild. The dock was great, and the internet was fine. He told us of walking trails and we set off. I wanted to walk along the mud flats, but Al wanted to walk the forest trail. We had just entered the trail when Al said 'Ooooo, berries! Oh, the bears have been in the berries too!'

Later, as we were eating the best pizza we'd had all summer (the only pizza?), we heard stories of cougar sightings. Glad I didn't hear about those before....  At supper George took orders for morning pastries -- cinnamon rolls, and bacon cheddar croissants. We got two of each -- and he earns our award for Best Cinnamon Rolls in the Broughtons!

From Port Harvey we went Johnstone Strait to Sunderland Channel, and anchored in Forward Harbor for three days of heavy rain. Ugh.

Then we set out for Blind Channel Resort, going first through Whirlpool Rapids and then to Green Point Rapids. The rain/mist/fog was coming in and out, and we were a bit grateful to follow a barge with a crane on it -- our radar went out early in the season. 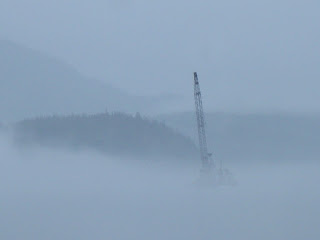 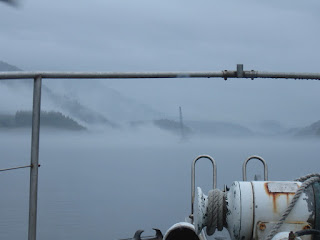 Now we are ready to run the rapids! There are three, very close together -- Dent, Gillard, and Yuculta. We left our little anchorage early with the high tide, and stalled by exploring Frederick Arm and doing a 'slow bells' approach to arrive at Dent Rapids at slack tide.


Hole in the Wall is off on the right. There is a rapid at the far end of that too, and we will not arrive at slack. But we are confused -- it still looks flat! So we approach with caution, but swirls and standing waves pop up suddenly around us, and we back off and retreat to anchor behind a hook to wait for the turn. Lunch and a nap before shooting through at the appropriate time.

We then spent a week anchored in Waiatt Bay. We had two gorgeous sunny days, and we soaked it up, which energized us for a few projects. The rest was quite rainy again, but Al was happy to learn that a problem leak appears to finally be repaired by that project!