While at the Pearse Islands, other than enjoying the sunshine, much of our time was spent in debating 'where do we go from here'. There was a good stretch of clear dry weather forecast. Did we want to take the time to go back up into the Broughton Archipelago and revisit a few places we had already been to, but this time hopefully in the sunshine? OR were we ready to begin a slow mosey homeward?

We decided we were emotionally ready to make the turn toward home. Though keep in mind, we had about 6 weeks before we needed to leave Canada.

We spent a few days in Beware Cove, watching bears. The ravens were strangely no longer screaming (http://mvvikingstar.blogspot.com/.../a-peaceful-morning.html). I speculated that perhaps they had been young ones, learning to call. Al read in one of the guide books that people anchored near the Indian villages have claimed to hear Dzunukwa. (https://en.wikipedia.org/wiki/Dzunukwa)

On our way through Beware Passage, Al called the patches of kelp 'Nature's ATONs' -- Aids TO Navigation. 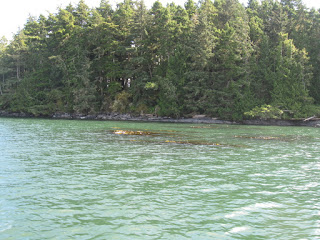 We spent a few days in Potts Lagoon also, watching other boats come and go. Other than that we saw nothing new there. Until we left, and in Clio Channel there were two humpback whales, just floating near the surface. We saw an occasional exhale, or the peek of the dorsal fins, but other than that you wouldn't have know they were there. We suspect it was nap time, or a mother nursing a young one.

We had been to Minstrel Island on Memorial Day, just before heading out to go up Knight's Inlet. THIS time, I came off the boat to explore a bit with Al too.