Our second day in Alert Bay was very special.

It got off to a good start with coffee from the store Culture Shock, where we also bought tickets to the dance demonstration at the Big House that afternoon.

A fellow boater we met in Sointula had told us of basket weaving being taught at the museum that weekend, and I was anxious to give that a go. On our hike in the Ecological Park we had noticed a number of trees that had been 'culturally modified' -- bark had been harvested. Many things are made from cedar bark. 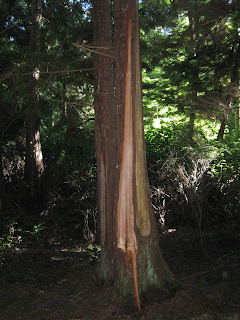 Instructor Donna was kept busy flitting between three tables full of people wanting to try their hand at a project. She made it all look so easy.  Here is my basket, start to finish.

I am pretty proud of my little basket. It will have a treasured space somewhere on the boat, holding some other small treasures, I am sure. I said this basket and experience of making it was well worth the price of admission.

But, the main exhibit of the museum were many of the items confiscated when potlatches were outlawed. They had been sent to museums in several locations of the world, and into private collections. Many have now been returned to the people and are housed in the museum. Photography was not allowed, but we spent an hour reading and viewing.

At 1:00 we took a break from basket making and walked up the hill. The world's tallest totem marked our destination. 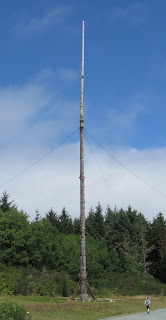 As we entered the Big House, the scent of the cedar fire filled us. We were welcomed by the chief in the native language, then translated into English. Several dances were demonstrated, one most notable the Hamatsa danced by an 8-year-old young man, Aiden Cook. We were told many of the young people were away off the island to a soccer tournament, but we were well entertained by the small group. At the end, we were all invited to join in 'the fun dance', so we can say we danced in the Big House.

Photography was allowed, but my camera does not handle low light very well. And, I didn't want to be disturbing the show with flashes, so we just enjoyed (except that the woman in front of us had a powerful flash on HER camera).

Before the performance, I took these two shots. 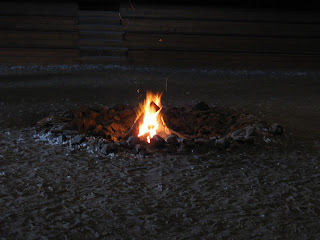