We signed up to be volunteer park hosts for a week in August. But when we emailed to confirm our arrival, the Ranger tells us that there isn't a host there and we can come anytime! So we headed in a couple of days early.

Then we learned that there wasn't a new host coming until the Thursday after our planned Monday departure, so we extended a few more days.  The Ranger's wife even brought us some fresh foods, which made our extension a bit more comfortable.

Once our hosting duties were taken over by the new couple, we stayed on as guests, waiting for the ship carrying son Micah to hopefully return to port. 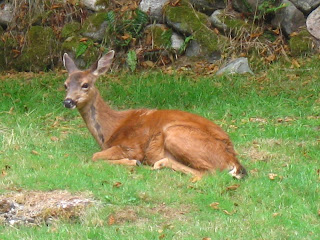 We spent 12 days as hosts on Blake Island, and stayed another four as guests.  There was a very significant storm on Saturday.  Luckily for us, the worst of the winds occurred during low tide, which had us tucked down into the bowl of the breakwater.

We went to Eagle Harbor on Bainbridge Island to re-provision and visit the coffeeshops.  Today we learned that USS John C. Stennis is back in port!
Posted by Viking Star at 5:26 PM