We've been getting ready for this for a long time.

You could even say it goes back to that first 'date' where Al invited me for coffee to tell me he wasn't ready to date. And we ended up talking for three hours. About our dreams. His was to have a boat and live on it. Mine was to travel. What a perfect combination!

A year and a half later, he brought Viking Star home. 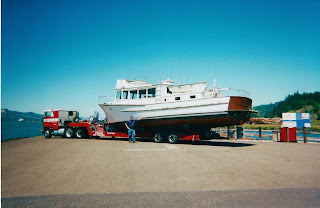 And the dream became more real. We've been getting ready for a long time, but it is still years in the future.

A chartered sailing trip to the San Juan Islands was a bit of a test. Could we stand each other, in small places, for eight days? Would we get sea sick? Actually, we discovered together that there is such a thing as LAND sickness--that sensation that walls and floor we knew to be stationary were rolling around us.

When we married in 2002 the plan was to depart in 6-8 years. Friends, family and aquaintences run the gamut of reactions: envy, dismay, curiousity. One even stammered 'But where will you have Thanksgiving?! My reply: 'Tahiti?'

So, seven years later. The kids are all out of the house. The youngest is a senior in high school and lives with his father. The fifth grandchild is expected in June. Our financial goal has still not been met, but departure was still two years away. We figured to make the bon voyage party a joint 50th birthday celebration (Viking Star was built the same year Al and I were both born.)

We have been getting ready for a long time now.

For some time, all purchases have been considered. Will we get 2-3 years use out of this? Can we use this on the boat? The kids have spoken for household items.

And, suddenly it seems, IT happens. We've been getting ready for a long time now. But I'm NOT ready! My babies are having babies. The house is a mess! We still don't have enough money.

So, first I cry. All the way to work. And I downsize my Starbucks order. And begin a frenzy of cleaning, sorting, hauling, organizing. We've been delivering many of those spoken-for items.

Al reminds me that I have been a lucky Grammie to have had my grandchildren so close until now. And that we hope their parents and they join us for portions of our adventure. Technology has shrunken the world. In the middle of the ocean, we can still communicate. We look forward to SHARING our adventure.

We've been getting ready for a long time now.