Its nice not to get Blown Up!

At times you will hear about how dangerous it is out there cruising, Pirates, Murders, Robberies, etc.  Well last night we were here: 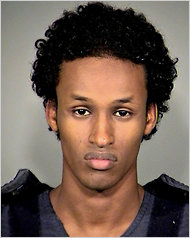 
"A Somali-born teenager attempting to detonate what he believed was a car bomb at a packed Christmas tree-lighting ceremony in downtown Portland, Ore., was arrested by the authorities on Friday night. They had spent nearly six months tracking him and setting up a sting operation, officials in Oregon said."


Yup, nice to not get Blown Up last night.  Thank you to all those who help assure a less dramatic outcome.   And yes, this does go to show that there is Danger everywhere, not just in Cruising Land.  Maybe it would be safer to move on to Mexico???
Posted by Viking Star at 12:13 PM