We had been told that crabbing can be good in Oro Bay, but we would  not get as far 'down the road', making Saturday a longer day -- we would have to get up early to hit the Narrows before the flood started running against us.

Chris chose to try crabbing, so Oro Bay it was!


Since we wanted to be underway by 7:30 AM at the latest, we did not want to let the pots soak overnight.  They had a good 5 hours, but still only yielded one small Dungeness.  No crab dinner this time.  Good thing the boys had snacked on the oysters purchased at Boston Harbor before we departed.  They steamed up the clams (also purchased) and rounded out the meal with the hamburger hotdish I had made (I don't care for seafood.)

I had fun watching seals again!  This mama and baby were more curious than most, and even came towards the boat while the boys were talking on the back, and the camera was handy. 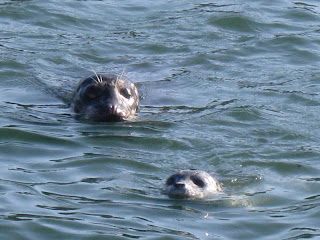 We did set an alarm, and were up and underway by 7:30.  We passed below the Narrows Bridge and officially left the South Sound,  BUT, we will be back in about a month for a haul-out. 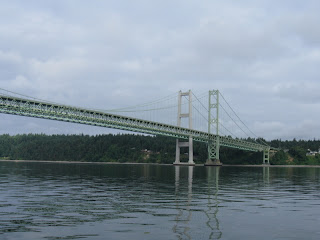