Yes, the Can Can. (or, how I made a 'frugal' PCV system for our DC generator)

I have mentioned a few times that I consider myself rather, ahem, Frugal.  And I do know this can be a fine line to walk along, being careful not to cross over into the downright Cheap side of things.  With this in mind I have a tale to share with you which happened while we were overnighting in Anacortes last week.  A tale,  I have to admit, where I found myself  feeling a bit sheepish as I  walked down the street peering into trash cans, pulling off the covers, looking into dumpsters.  All but crawling into them, or rooting around while in search of my prey.  An Aluminum Can – beer or soda pop, I was flexible.

Oh sure, I could have stopped by Safeway and purchased a beverage to get to the same goal – but given Kristi and I do not really drink soda pop,  and given I gave up CANNED beer a long time ago, the thought of  purchasing a product to pour it out – or force consumption – just did not seem, well, very Frugal.

I finally acquired one by asking a random person standing around (ok, he was part of a yacht club that was in the marine for the weekend) if by chance there might be an empty can I could have (come on, yacht club, rented the floating barge – you know there were TONS of empty cans around by that point).  And sure enough, an empty Canada Dry ginger ale can was produced.  In nice shape too!

Now, this post is not really about our approach to the three R’s: Reduce, Reuse, Recycle if you will   (Never could figure out what Math had to do with the letter R, nor what picking up a tipped over lamp had to do with school…)  This is more about  what I wanted the can for, which was  this: 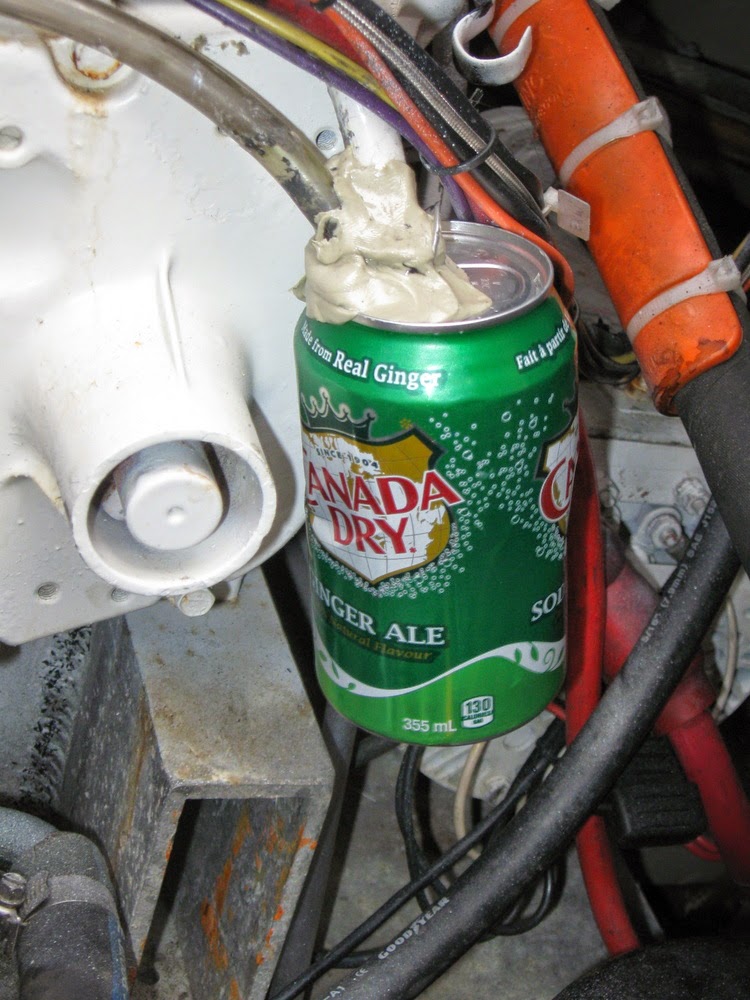 What you see here is a poor man’s PCV system.  The larger white tube is the crankcase vent tube on our little Kubota EA300 diesel engine, used for our DC generator.  When running, this tube vents a small amount of gas that come largely from blow-by around the piston.  All engines do this, though some with more passion than others.   The issue was that even with only a slight waft of blow-by, the gases from the crankcase vent tube smelled.  And given Viking Star's age, the ‘bulkhead’ between the lazarette and the aft cabin is not as air-tight as it once was (even if it ever was) the result when running our DC generator was a stinky aft stateroom.

Stinky staterooms get the crinkled nose from Kristi.  Crinkled nose is an indication of something not desirable, which ultimately has Al rooting around in city trash cans looking for recyclable aluminum cans.  And ultimately,  back to that 1st picture with some additional explanation.

See the bigger white tube is the crankcase vent tube but the key is the smaller sorta clear one.  It is routed over to the old ‘Jet Boost’ fitting on the intake manifold of the Kubota as shown here:

Originally that fitting was used to introduce a slight amount of extra fuel for assisting in very  cold weather starting.  But when I pulled off all the fuel piping to simplify things, this connection was leftover.   And it works great as a way to provide a place to send those stinky crankcase gases.  In operation the crankcase gases are deposited into the can where they cool and some amount of ‘crud’ falls out to the bottom of the can.  Then the gases are sent to the intake via the smaller tube through a combination of positive pressure from the crankcase pressure and a small amount of vacuum created in the intake via the air filter restrictions.  Finishing off the can is some plumbers putty to semi-seal things.

And it works well.   With this in place we are able to run our generator nicely without any aft stateroom smell, and without any crinkled noses.

But I will say, even though this Can can solve the smell problem, I will admit I felt a bit less than Frugal while in my search for it.