We have cruised numerous times with our friends Rick and Christie, both on Viking Star and on charter sailing trips.  (They also generously host us when we go to the Portland area for the holidays.) The four of us, along with three more people who have previously cruised with Rick and Christie and have worked for the same insurance company, all met up at Road Town on Tortola, the British Virgin Islands!

Al and I arrived on St. Thomas, US Virgin Islands, a day ahead and enjoyed exploring.  We checked out a vendors market, had lunch at an Italian cafe, purchased sunscreen, and took a 3-hour nap.  We watched some TV, and then slept all night!  The next morning, this was the view from the dining room of the hotel.  Just beyond the red roofs is the ferry dock we depart from in the afternoon. 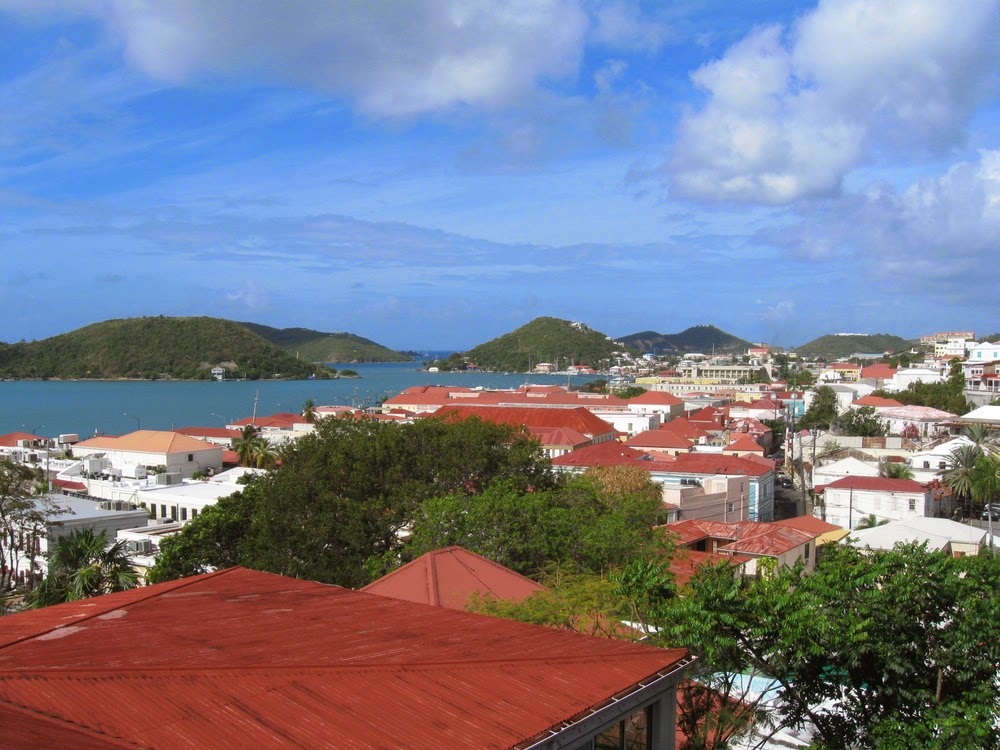 It is dark when we arrive at The Moorings at Road Town, Tortola, British Virgin Islands.  Seeing that Captain Rick is in a skipper's meeting, we find dinner on our own.  The whole group meets at the boat, cabins are assigned, provisions are stowed, and eventually we all settle in for our first night on the boat. 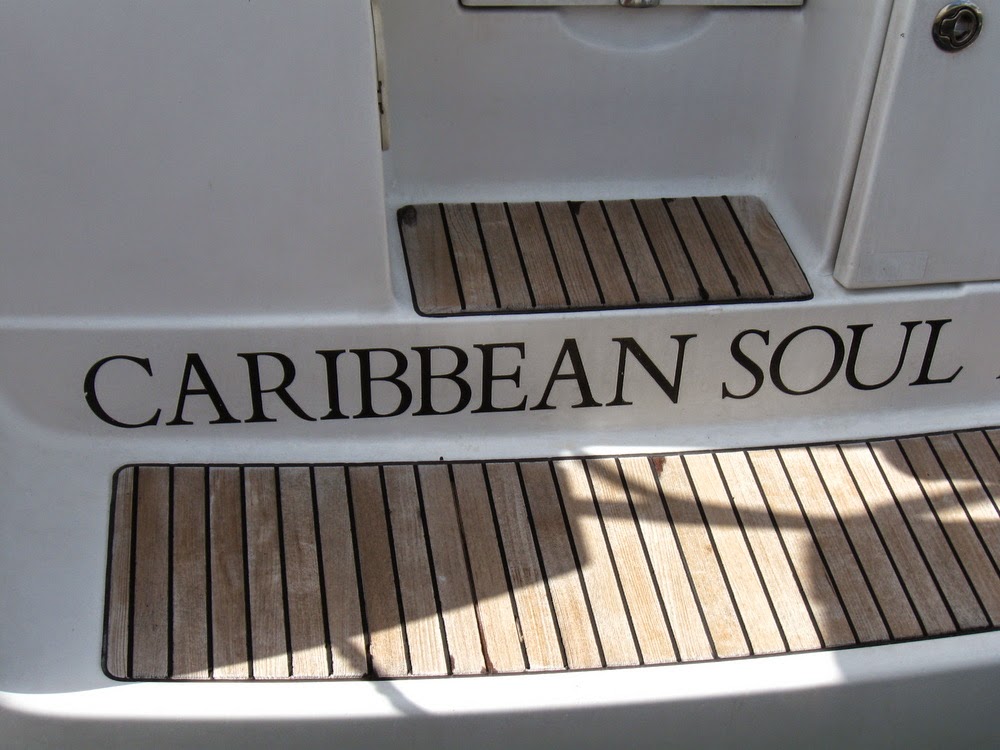 Next morning, we are cleared and on our way!  Rick is at the helm, and Al has a new role -- deckhand! 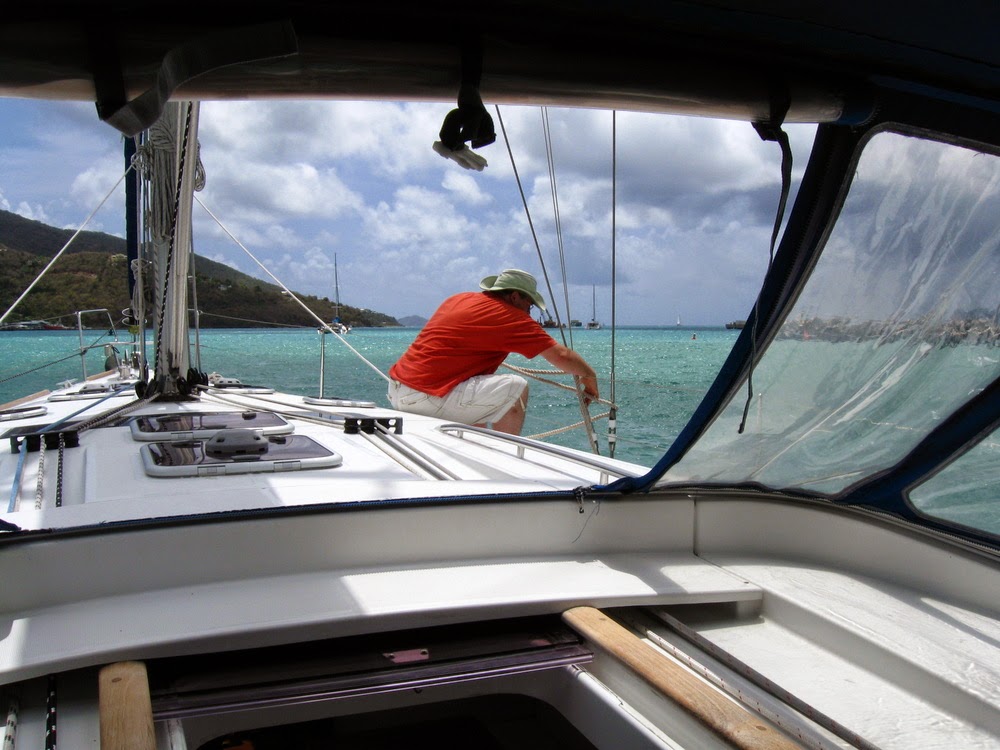 First stop is The Indians for some snorkeling.  I am the only one of the group who has NEVER been snorkeling before.  I am a little hesitant when doing something new, so I am grateful that Patty stayed with me and encouraged me the whole time.  It took a while to work up to it, but I WAS able to relax and enjoy the view, seeing a school of fish pass below me. 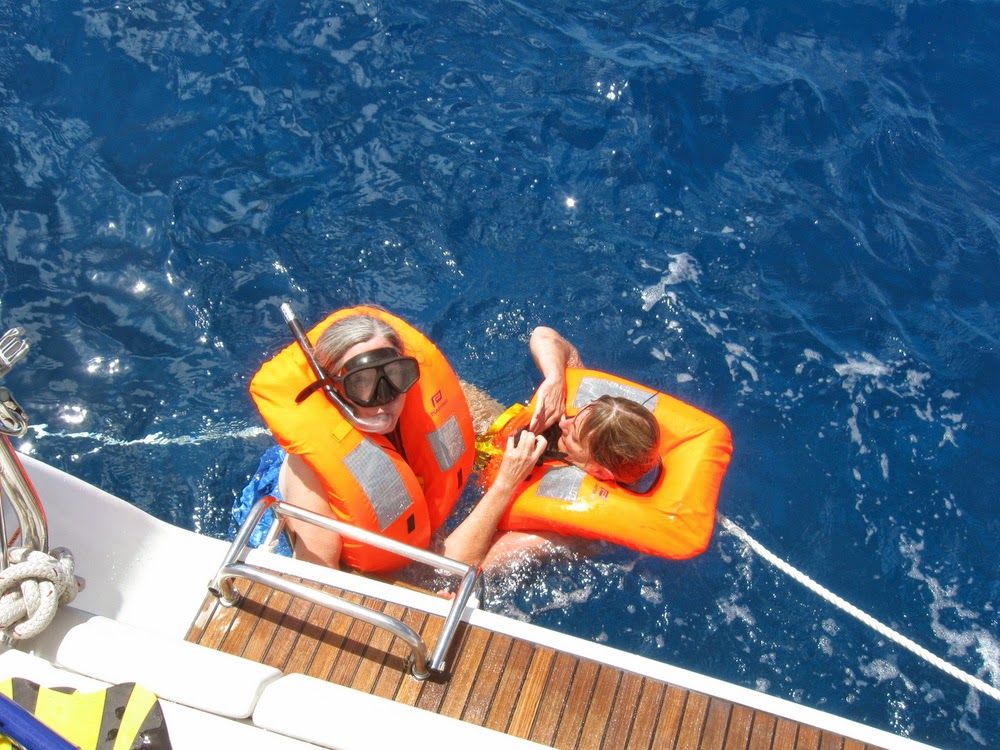 We then moved on to catch a mooring buoy at The Bight, Norman Island.  Fine dining for the trip was provided by Woody, but Rick and Christie also did some cooking.  Well after dark, we took the dinghy to Willie T's, a barge bar in the bay for painkillers and dancing!  And the first time running into the couple who had been in the custom's line behind us.  We were the last two couples to clear, so we'd had quite a while to chat and become acquainted.


Woody had read about Norman Island and learned that the Pirate Blackbeard had used it as a lookout! The majority of the group hiked to the crest.

After our adventure, we head out for a bit of sailing.  By the time we get to Cooper Island, a few in the company were turning green (not me or Al -- it hasn't happened to us, yet) and were glad to get off the boat for conch fritters and more painkillers.

Day Three, the wind is up, and so are the waves, 4-6 feet and a bit choppy.  But we sail north into the Atlantic Ocean a bit, heeling and tossing, which has me hanging on like a crazed monkey before returning to the tiny island of Marina Cay.  Woody tells me he thinks that's funny since we live on a boat.  I answer, 'It's NOT a sailboat!'

There is a bar atop the island, with a singer.  A group from California accost us and force us to join their conga line before we escape and enjoy this view.

Day Four, we cover a bit of the 'ground' we did the previous day, but veer more east to the Virgin Gorda Sound, and Leverick Bay.  Groceries, shopping, more conch fritters, fries, painkillers etc.

The next day we have, in MY opinion, the best day of sailing -- peaceful and calm and with the wind. And we stop at Cane Garden Bay on Tortola.  Paradise.  We stay for two days. 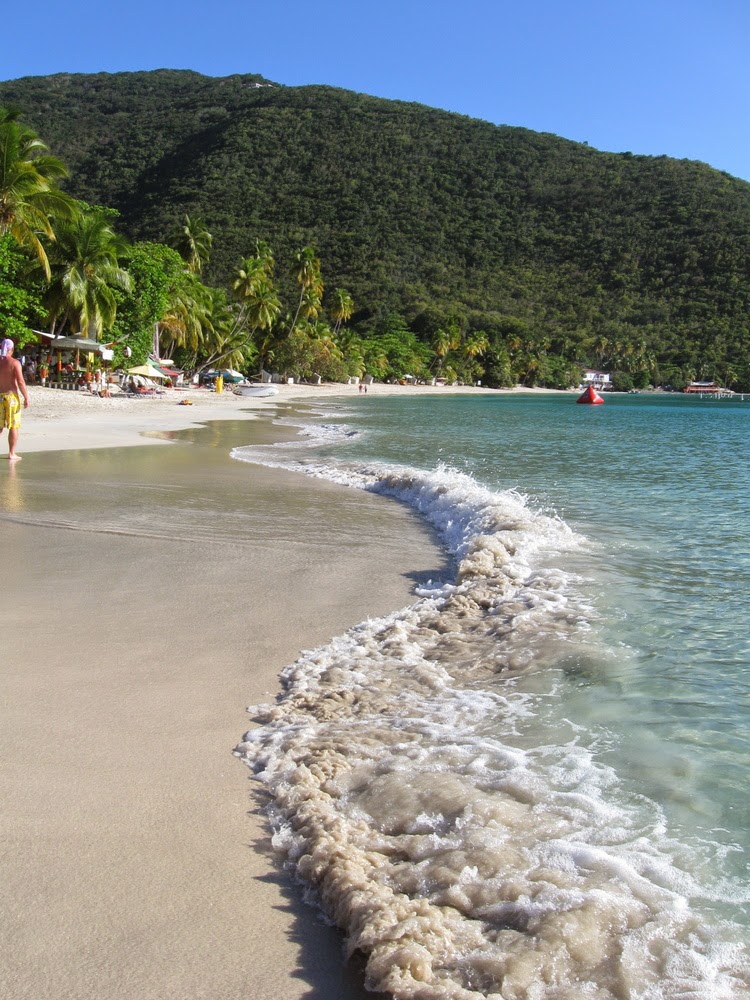 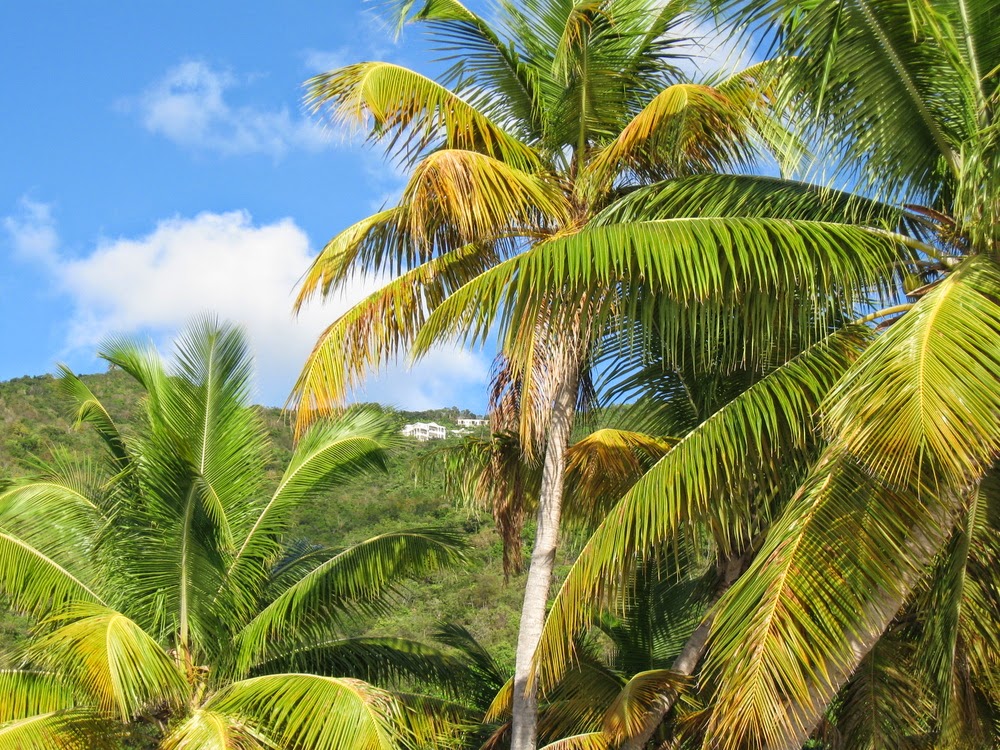 From Cane Garden Bay we sail west past Jost Van Dyke and White Bay, then turn south until Rick - who has been watching the clouds darken behind us - cuts the engine and we motor around the corner of Tortola to Soper's Hole.  And we have the heaviest rain of the trip, but we are at a mooring buoy.

The next morning we sail as long as we can, around to the south side of Tortola and back around to Road Town, back to The Moorings.  The boat is checked in quickly and we are shuttled to the ferry dock for the fast ride to St. Thomas, and the villa for rest and relaxation . 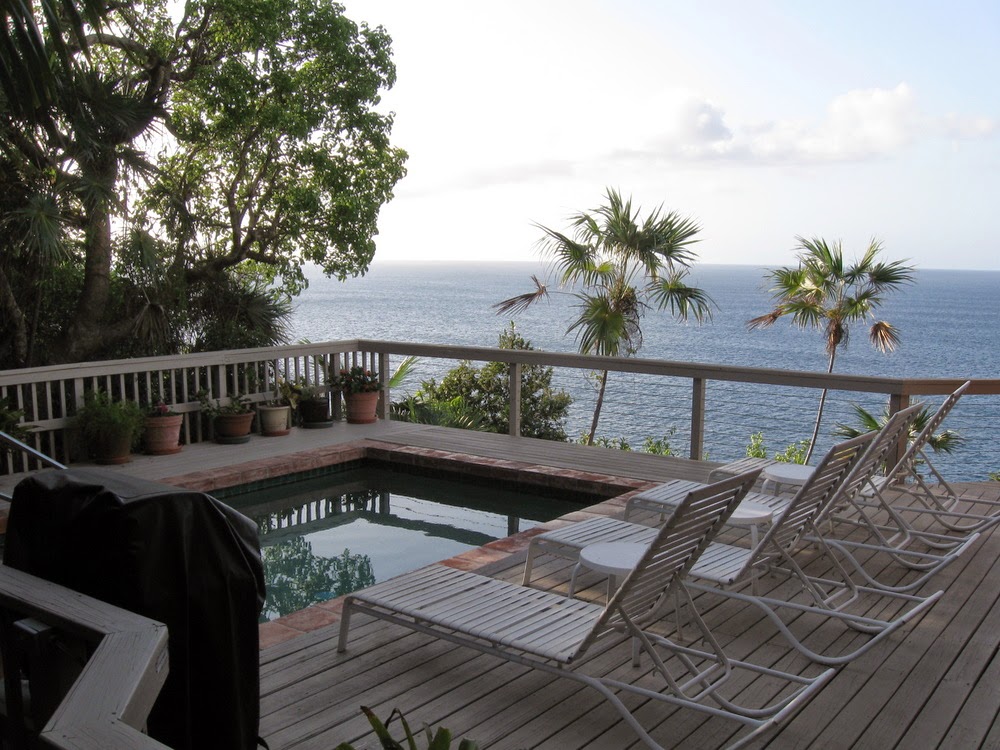