There is a rocky shoal offshore of Eagle Island, and it is quite a popular place for a local crowd!  I have counted over 25 seals at one time.

The day we arrived was the lowest low for our time here.  It appeared that larger seals were in one area, and small heads congregated at the other end of the reef.  I told Al that it reminded me of a 'kiddie pool' with the Moms on deck sunning themselves while the kids splash nearby.


Today the fun continued with log rolling!  Last night a large log came in on the tide.  After sunset I could see that something was sitting on top of it.  I thought it was a goose from the flock that had crossed the channel as the sun set.  But when I looked with my binoculars, it was a seal!  And a smaller, darker one had joined it.  No picture of them, but this morning another log came by.  This one was quite a bit smaller, and tippy.  There was quite a bit of splashing and rolling going on and many seals took a turn. 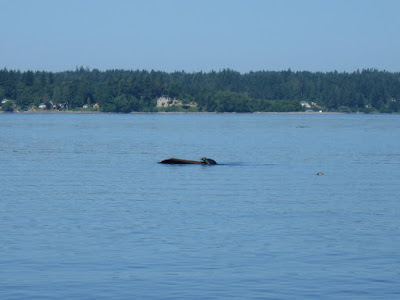 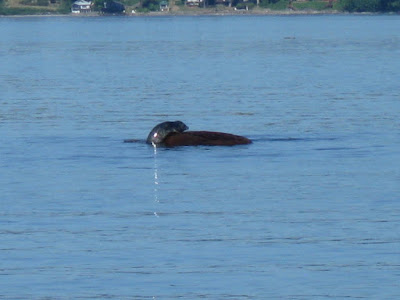