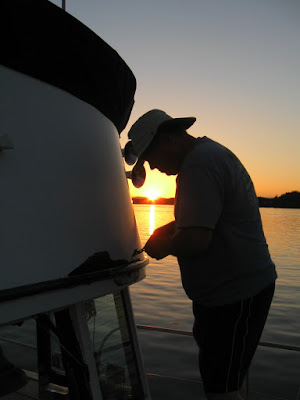 It's a pretty photo, at first glance -- my husband and my boat, framing the sunset.  But then you may notice that Al has a sharp object, his new favorite tool, it seems.  And he's just getting started. 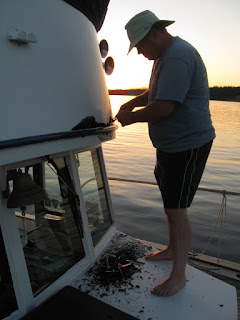 He's been making quite a few messes like that lately, since returning from leaving the boat alone for a year.  In many places, Viking Star has 'gotten soft'.  But that's enough in the falling dark. 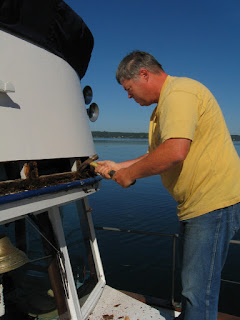 In the morning, before the sun has a chance to warm to the predicted high temperature of 90 (which it DOES in the afternoon), Al gets out a circular saw to more fully expose the rot he had discovered.  It is going to be a much bigger job than he anticipated when he first started poking around this spot.  He eventually even takes down the blue rain gutter as well.

He's done poking, and I'm done vacuuming, and now it's drying out.  Al has been surveying his stock of wood and MAY have enough for the repair.

For a guy who doesn't want to hang laundry outside to dry for fear of 'looking like hillbillies', he's sure seems to be doing his best to make sure we do!
Posted by Viking Star at 3:59 PM