We knew she was coming SOME time this week, so we weren't totally surprised, but we were very excited to see the Bluebell join is for Christmas Ships on the Willamette River last night.  Our crew cheered and waved as we passed, and theirs cheered and waved back.  This picture doesn't do justice. 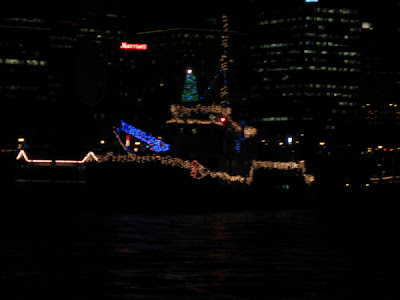 We had the honor of sharing a dock with the Bluebell on our downriver trip on the Snake.  Check our previous post to see daytime and sunset pictures :
http://mvvikingstar.blogspot.com/2010/10/few-days.html
(Bluebell is the USCG ship that tends the buoys and markers on the Columbia, Willamette and Snake River. In this way, she has left her mark all up and down the rivers.)

The Christmas Magic is still at work.  There was a tornado in Aumsville OR yesterday as a cold front passed through.  Portland had black clouds and heavy rain.  But there were only perhaps occasional sprinkles as we paraded.  Here we are on a march downriver, where due to the Bluebell and Portland Spirit accompanying us, all bridges from the Hawthorne to the Steel were opened.  We stopped traffic all over town!  Here we are as we pass through the Burnside Bridge with the Convention Center towers in the background. 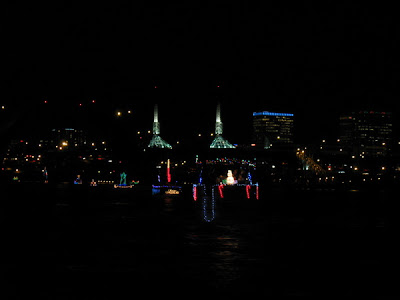 Timing was almost perfect----the rain began again as we docked for the evening.
Posted by Viking Star at 11:40 AM