Deneen and I have been friends since March 2010.  But we didn't meet until today!

A modern friendship, we were introduced on facebook, by a suggestion from my brother.  She was the friend of a friend of his daughter, my niece.  He said her posts were among the most positive and uplifting he had seen, and 'She lives in Vancouver, too!  I can just see you two getting together and chatting over coffee!'

Yes, we both lived in Vancouver.  Only I was in Washington State and she was in British Columbia.

'Never mind,' I said.  'We will get there eventually!'

And here we are, today: 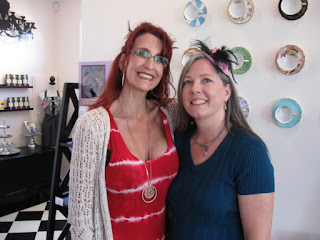 Deneen organized a Tea at Ardorabelle, and it WAS adorable!  And I met many of the friends I have 'seen' on facebook, and a few more!  It was a lovely continuation of our friendship.
Posted by Viking Star at 8:22 PM