Our Last Full Day with Ryker

We weren't in a rush, but we didn't dawdle over our morning coffee and hot chocolate. We had a long day ahead -- estimated five hours travelling time to reach our destination at Cornet Bay. There was fog, but it was rising as we left Jones Island -- oh, about 9AM?

We traveled through the heart of the San Juans and down the east side of Lopez, where Ryker's teacher's family has property. We went out Lopez Pass onto Rosario Strait, where Captain Al had to contend with some commercial traffic. Conditions were okay, with negligible waves, but 3-4 foot swells -- a bit of a roller coaster! NOAA had forecasted 0-1 foot.

The closer we got to Bowman Bay where we planned to hold over to wait for the slack tide at 4:52PM for Deception Pass, the greater the waves and swells and their orientation became. There were two other boats already at the dock and several anchored, but there was room at the float for us.


An easy lunch of salad and grilled cheese sandwiches, and by then the fog had lifted and the wind died and the sun was sparkling. Al and Ryker went for dinghy ride to explore the bay, while I stayed behind and relaxed with some knitting. 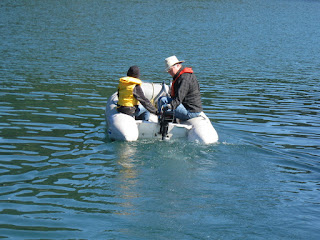 The appointed time arrived, and we departed the bay for Deception Pass. There were several fishing boats out, and we noticed a larger powerboat approaching from the north. He seemed to be the only one making the same move we were.


We take a spot on the dock at Cornet Bay State Park.  Al and Ryker take another dinghy trip to explore Ben Ure Island. It is private and can only be visited by reservation, so they circle the island and return.

Saturday we are on the move again before 8 AM, and enter the Swinomish Channel to arrive at LaConner WA. We have time to stroll and snack before the arrival of the rest of Ryker's family to arrive. We have lunch together and do a little shopping before we haul Ryker's stuff back to their vehicle and they all load up and head for home again.

We have loved each of the visit the three oldest grandchildren have had with us -- two last summer, and this one. The next will probably not happen until next spring, since we are leaving for six months in Canada soon. It was also allow the next in age to have another birthday before his turn.
Posted by Viking Star at 8:31 AM