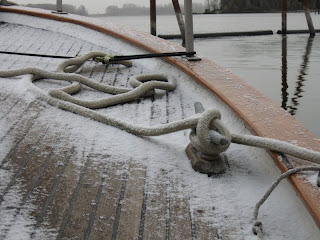 Some times both, some times just one. In any case, this last Christmas Ships was definitely one for the Books.

Kristi and I have participated in the Portland Oregon Christmas Ships parade for 6 years now. http://www.christmasships.org/ This is a group of about 40-50 boaters who go out each night for two weeks with their boats decorated. We run two fleets, one based on the Columbia River and other one downtown on the Willamette. On the weekends, we join forces and make one LARGE parade!

Portland's lighted parade is one of the longest running parades in the nation, with the possible exception of one of the parades up North, it might just be THE longest running. (Sorry, you guys down south. Counting all those years you did 4th of July as part of the running history of the 'Holiday parade' is a bit of a stretch . . . .) I am sure these things change in flavor over time, but at this point we have two weeks of folks who decorate their boats, buy the fuel, brave the nights, and have a great time. All on their own dime! Any donations from local business goes into an overall 'blanket insurance' policy for the overall group Christmas Ships Inc. (Welcome of the litigious times we are in).

Christmas Ships have a history of always putting on the show. Each night, individual skippers must assess their own comfort level, but we do have a large group of very experienced boaters, and each night the USCG, CGA, and/or local sheriff boats are out with us. Issues such as Fog, wind, LOGS IN THE RIVER are all considered. And usually it must be a rather extreme night (Wind mostly) that will cause a night to be canceled.

This last year three nights were canceled. Old timers say that is as many as had been canceled in the prior 20 years all combined.

We had a 40-year snow event this last December in Portland. Wind, Snow, Ice. Extreme cold. Very very unusual, and we got 3 nights canceled. But that does not mean the rest of the nights were uneventful! Moving up the Multnomah Channel is always a favorite of ours, and this year it snowed again. What a treat, that is once we get the frozen dock lines untied to get out of Saint Helen's. Viking Star stayed overnight back at Hadles Landing with a few other boaters and moved back to the marina near the Airport that morning. The Wind was still up that AM, and I was about to send Kristi out to start Chipping ice. But we did make it.

We are looking forward to doing Christmas Ships again this Winter. It may be our last for a while. Kind of depends on where Life leads us. But if you happen to be in Portland this December, and take in the Christmas Ships, be on the lookout for the 'Star Boat', as one young Fan noted: http://www.youtube.com/watch?v=gt6jEFiom_Q