For the past eight years, as soon as Christmas Ships and the Holidays are over, it is Project Time on the boat.  In the past, Al would use the dining table as a work bench.  BUT one of last year's projects was to install pretty new formica on said table, kitchen counters, and bathroom counters.  Which means he should  no longer sand, paint, glue, solder, epoxy, etc. on the table, and since he's intelligent, he won't.  Besides, the table is now a desk of sorts, which is occasionally used for dining. 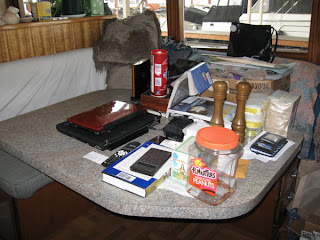 Al is using an area of the boat that has served at a work bench before, but never so extensively during the Winter---the roof of the aft cabin.
Al is a little bit Absent-Minded Professor, muttering and talking to himself.  'Where are my glasses?  This should go here......or would it be better there?  I'll have to think about that.  Now, where did my pencil go?  Geez, it's cold out here....'  But this project has him looking a bit more Mad Scientist!  Look at all those pipes and gauges!  Though I haven't heard any evil laughter, yet. 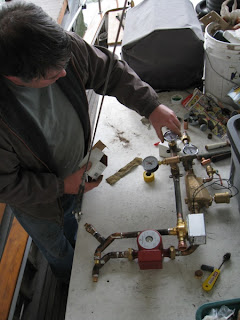 This project is in preparation of installing the hydronic heating system, with a Hurricane boiler.  Probably won't be working soon enough to be of much benefit this season, but will be greatly appreciated when we go 'up North' for the next 3-5 years.
Posted by Viking Star at 3:34 PM