The trip from Friday Harbor to Anacortes was pretty uneventful, just the way I like it.  The winds were predicted to be 15-25, and they were pretty steady at 25.  We had one gust that funneled between two islands that tilted us over for a bit of thrill, and hitting 47 knots on our gauge.

We were the only boat at Eagle Harbor on Cypress Island, a first for us.  And yes, we did see an eagle.

We arrived in Anacortes before noon and went directly to the fuel dock.  This was our main purpose for coming to Anacortes, in addition to visiting Starbucks.  It took nearly two hours to put on 320 gallons and write the check for $1200.  By the time we had also pumped out the holding tank, it was going on 3:00 and we still had not provisioned.  We decided to be leisurely at Starbucks and read the paper, then get our two bags of groceries, and stop at the marina office and give them $35 to let us just stay for the night.


Since we had  power, a load of laundry was done before bed, and a second started this morning before a trip up to Safeway for more Starbucks and a couple of donuts.  And we were away around 10 AM.  Near the twin bridges on the Swinomish Channel, we saw two different eagles, and a dead duck in the water.  That was kind of sad.  I thought 'perhaps' it had some oil on it?  We WERE near a refinery.  But then we also wondered, where DO dead ducks go?  We saw what looked like a duck blind on shore....maybe he was shot and not recovered? 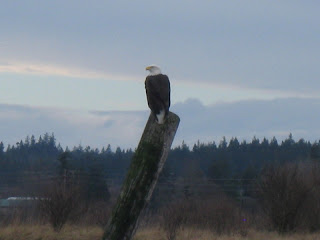 We have been down the channel a couple of times, and had noticed the ramp with the 'salmon' on it.  Al was excited to see if the public dock there would be open, and it was! 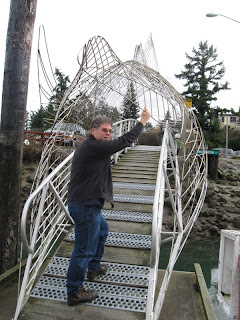 We had fun strolling the streets of this cute little town and ended with an early dinner at a pub.  Tomorrow, Deception State Park.
Posted by Viking Star at 6:04 PM