Whew!  Last night we were reminded long and hard that we live on a boat!  (Scroll down for the 'just published' post on the Liveaboard Policy)

In the afternoon, the wind pushed the needle on our anemometer up to 47.  We still are not sure if that's MILES-p-h or KNOTS-p-h.  But when it gets up there, who cares.

It was getting pretty rough after dinner.  Eating included holding onto the chili bowl so it wouldn't slide off the table.  The ferries seemed to be coming in a bit faster than normal.  Were they anxious to get back to dock? Late due to the weather and trying to make up time?  Is it easier to control at a faster speed (like Viking Star is)?

The boat shuddered many times.  Al stuck his head out the window to check the lines and fenders.  Even though the wind was 'blowing us off', the breakwater was rolling pretty good too, and we would ride those fenders between us.

A big sustained gust pushed that needle up to 55!  Then Al shown the searchlight across the water, and it showed a scary sight.  The waves didn't look THAT big in the DARK!

Right around 10 PM, it seemed to calm a bit. The rolling IS a lot easier to take while lying on our nice memory foam mattress.  I slept reasonable well.  Al still had a rough night, but I think that was more due to his cold and 'dealing with' all the fluids he's been drinking.

This morning, he stuck his head out again -- in the heavy rain -- to check the lines and fenders.  All survived well.  And then he cried, 'WHOA!'  I had to stand to see what he was seeing.

Just for a 'before' reference -- a photo taken of $13M boat Komokwa as she checking in with Customs. 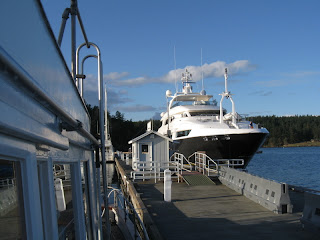 And today's view, where the barrier has been pushed over so far that it nearly closes off the passage: 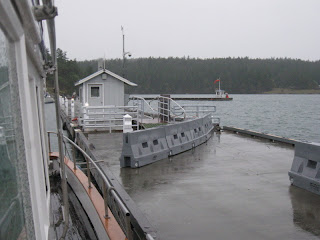