From Sullivan Bay we went to Greenway Sound which was wonderfully reflected in glassy smooth water. We found where the marina USED to be. It was a wonderful spot, but too deep to anchor. We took a short tour and found that the southern section had extensive logging visible, so we returned to the mouth of the inlet.

A sailboat, whose crew we had met at Sullivan Bay, occupied our first choice of spots, so we nosed around an islet -- a quite nerve-wracking experience for me where I was to be on bow watch, and it was NEEDED -- and anchored in 65-80 feet of water, depending on the state of the tide.  We knew it was a rock bottom because we could hear the chain rubbing as we shifted. It sounded like rumbles of distant thunder. We both said we were glad our cabin is in the rear of the boat where we couldn't hear it as well.

Kingcome Inlet reminded us much of Knight Inlet, though shorter and narrower. It was a sunny day, and glorious. It got me to thinking -- this was only the third DAY of sunshine in six weeks in the Broughtons! A day going up Knight Inlet, a day in Booker Lagoon, and now a day in Kingcome Inlet. We may have had sun breaks, a few hours of sun here and there, but not days.

Try to imagine the two pictures below as one big panorama. (Google editor won't allow me to align them together...)

This is our entrance to Kingcome Inlet. 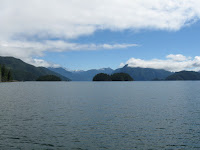 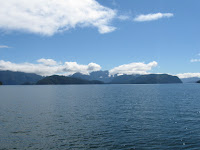 In the area where Wakeman Sound branches off from the Inlet, we saw dolphins in the distance. Then a whole pod were racing across the inlet, passing right in front of us! It looked like it truly was a race, as they barreled right up to a rock on shore!


Even though we have discovered how to set the camera to continue shooting as you hold down the shutter button, dolphins move SO quickly that they are very difficult to capture. I told Al as I was shooting that I would have over 200 pictures to go through. But at the end of the day, it was 426. On the first edit, over 200 were deleted.

Around the corner to the left, we are looking for a 'modern pictograph'.

To be honest, when I first saw a picture in a guide book, I was all ready to not like it. It just didn't seem to 'fit', in my mind, of something to put on a natural feature. BUT, now that I've seen it 'in real life', I love it! It measures 26 feet x 38 feet, but everything here is SO big, that this is almost dwarfed. 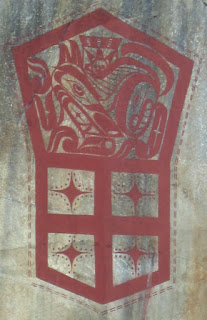 As we returned down the inlet to Belleisle Sound, the dolphins were ready for more interactive play! They followed us for quite a stretch, playing in our wake, swimming alongside, and diving under the bow. Magical! 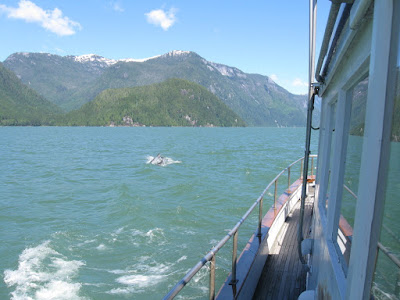 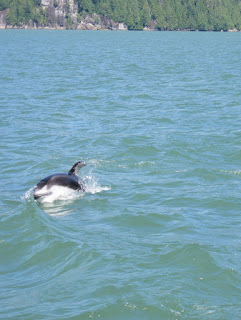 We liked our anchorage so well, we stayed two nights!