We DID meet up with our friends Dave and Sandra at Glenthorne Passage last Tuesday!

We met Dave and Sandra last spring at Prevost Harbor in the San Juan Islands, and ran into them once more at Sucia.  Their dog Max was obviously aging, and we were sad to learn he did not make it through last winter.  This year, when we spent some time in Vancouver BC in May, they invited us to their home, where we met their new puppy Jake.

Jake is now five months old.  Though we consider ourselves to be more 'cat people', even Al said that Jake is the first dog that has made him think we would like to HAVE a dog.  Of course, the biggest deterrent for that ever truly happening was watching Dave row Jake to shore four times a day. 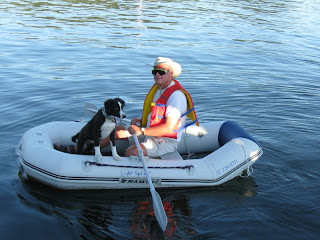 We so enjoyed our time together in Glenthorne Passage that when we moved on to Montague Harbor, both boats went and rafted up there for another two days.  The men did some brainstorming and problem-solving -- Light Spirit had an engine issue, and Viking Star had a blip with the watermaker we had fired up after more than a year out of service.  The women discussed and traded books.  We had quiet times on our own boats, and we shared dinners, drinks, and games in the evenings.

We enjoyed Jake!  And he enjoyed Viking Star -- gnawing on cleats, 'magically' nearly swallowing a length of rope with which we had tried to replace the rope toy he had lost, losing a baby tooth, running the side decks and up to the bow for a better vantage, and just the occasional bark at birds and seals.