On Sunday, we visited Wild Thyme, again.  We were spending more than $20 a day there.  Now the coffee and food was really YUMMY, but our budget can't continue indefinitely, so three days was the limit.  After visiting St. Christopher's for an inter-denominational service, we motored 'around the corner' to Winter Cove.


There were a lot of boats in Winter Cove.  And as I was checking facebook that evening, I told Al 'We should email Light Spirit -- they said they were going to be in this area about now.'  The next morning, guess who snuck up to us as they were leaving the cove?!  We made arrangements to meet up later the next day in Glenthorne Passage.

But first there was another reunion planned!  The boats we travelled up the Columbia and Snake Rivers with in Fall 2009 were passing through the Gulf Islands on their way to Desolation Sound, and they planned to stop in Winter Cove after clearing Customs.  'Maxine' with the Hamiltons showed up first, and 'Brigadoon' with the Critchlows followed about an hour and a half behind.  It was great to catch up!  (I think both couples will appreciate that I not post the photos I took of them.  Serves me right for only one shot of each of them, catching them unaware, with not very flattering results.)

After dinner, we retired to the deck to sip Fireball as the full moon rose: 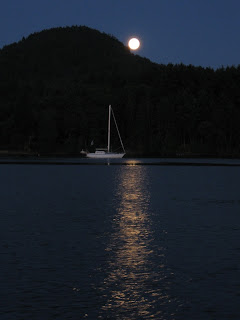