Once upon a time there was a man who had recently become divorced, and he went to the beach to contemplate his future.

He found a quiet stretch of sand and watched the waves come and go.

Soon he noticed a couple coming across the sand, a little old man and a little old woman. They helped each other as they went, and found a log to sit on, facing the ocean together. The woman pulled a sandwich from her bag -- it was wrapped in waxed paper, as picnic sandwiches were wrapped long ago -- and gave half to her husband. And they quietly ate together.

And the man who was watching thought, "That's what I want of my life."

A time later, he told the woman who said she loved him of the people he had observed and come to call The Sandwich People, and that this image is what he hoped to fashion of his life. And the woman loved the man even more. And the woman and the man became husband and wife.

Half a continent away, there was another man and another woman. They had loved each other for a long time.

They had helped each other across life -- the births of children, the death of a baby, moves from home to home. They watched their children grow and leave and have children of their own.

They grew old together. And when a daughter returned for a visit, they laughed to tell her that they tied each other's shoes; Dad helped Mom fasten her bra, and she would comb his hair for him. When the daughter drove the Mom and Dad to town for groceries, they both pushed the shopping cart together, side by side.

And the daughter thought, "My God! These are the Sandwich People!"

But the story goes on. And time goes by. The health of the old couple begins to decline, and their children worry about them. The old man and the old woman need more help than they now can give each other.

The old man tells the daughter, "I can stand to be most anywhere, as long as we are together!"

But the old woman is not happy. She misses the comfort of her cat, and the familiar surroundings of the home she has lived in for more than 30 years. And the old man knows she is not happy and becomes unhappy himself. 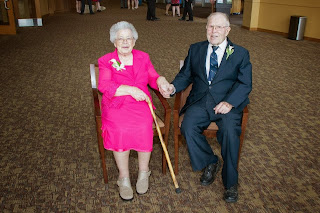 And the daughter tells her husband "My fantasy would be to move in with them and take care of them." And the husband recognizes that his wife will become unhappy if he cannot help to make this fantasy come true, and tells her, "It is not outside of the realm."


And the woman loved the man even more.
Posted by Viking Star at 6:39 PM