It is a beautiful name, pronounced by our guide Liz.

In guidebooks and on charts, its English name is New Vancouver. Liz doesn't know where that name came from.

But this settlement was the dream and purpose of her father, Chief Ki'ki'klala (Bill Glendale). For millennia their people's territory was Knight Inlet. In the '60's the village dispersed when the government stopped sending teachers for the school. Families moved away to keep intact.
There is a  marina, with power, and spring water, showers and laundry. They have hosted large canoe/kayak groups with ample space for many tents. There are over a dozen houses, an office, a small store, and the traditional long house. Summer brings students home. We enjoyed the friendly dogs, and seeing a few cats on porches.

Liz said that many who visit find it to be a spiritual experience. And we had a moment together when she told us her father had recently died. Many of his personal items are usually displayed in the long house, but during the year of mourning they are in his treasure box. For us, it is a reason to visit again.

Out of respect, I took only a few photos, but with permission. 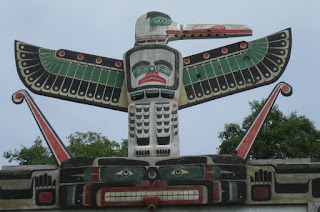 We stepped into the long house, and I took a deep breath, and said 'Aaahhhh, it smells so good!' Cedar and wood smoke. Another sister, Molly, came to visit with us in the long house too. We told them we had traveled to the end of Knight Inlet, where we had anchored. They told how they go there each year to prepare gleetna from the oolichan fish. They had been there just a month before we were there.

We turned around and saw that the house posts of the entrance were grizzly bears. And we mentioned that we had seen the grizzlies on Knight Inlet at Glendale Cove. Liz said 'That's our family name -- Glendale!' I hadn't put that together until that point.

Molly had also told us of a visit by a grizzly to their settlement three years ago. The bear had found their plum tree and climbed into it and broken a branch. And not just a wimpy branch -- and her hands showed a good 8-inch diameter. She said, 'When he stood up, he was nearly as tall as the tree!' We had seen black bears throughout the islands, but I was just amazed that a grizzly would wander so far from the mainland.