Last night when we left the boat yard I couldn't decide if it was a 'heavy fog' or a 'light mist', but it continued through the night, or even rained, because there was a puddle where I have to sit to get back onto/off of the boat.

Here are some early morning visitors: 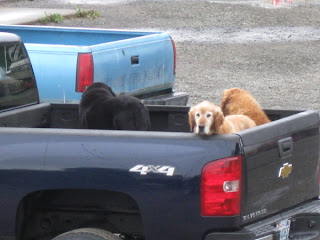 By the time I got the camera out, the fourth one had laid down in his corner.  Another visitor trotted through the yard this afternoon....it was a doe, a deer, a female deer.
So I actually helped with a couple of projects today.  Al wanted to move the boot strip up an inch or so, so I attempted to help with the taping.  He kept saying 'Don't let it wobble!' and I wanted to say 'I can't stop the wind!'  It took awhile, but finally he was happy.  We will see how it looks when we remove it!
And I helped to remove the stainless steel screws in a through-hull with bronze.  Al may follow-up with the story and pictures about that.  But here is my view during this project:
Speaking of unnerving!  It is SO strange to move about on board at the moment.  For the past 10 years, the only time I have been on Viking Star is when it's been on the water.  Okay, I stepped on ONCE when it was in dry dock before, but that was a floating dry dock, so there was still some motion.  It is just plain weird to move about the cabin expecting those shifts, and now it DOESN'T move, so it feels like it HAS.
We are scheduled to be put back in the water at 4 PM tomorrow.  Al did a coat of white paint above the boot stripe this morning.  It needs 24 hours to dry before the second coat, which needs 4 hours drying before it is 'tack free', giving us JUST enough time to do the second coat tomorrow morning.  The bottom paint is less of an issue, with only three hours needed between coats.  Two coats need to go on.  A third if we have enough paint and time.