While the Young People Were Visiting...

We left the Destruction Pass State Park on Sunday the 24th and went through the Swinomish Channel north toward Anacortes WA.  On the shore of this very narrow, man-made channel we found a doe and her twins. 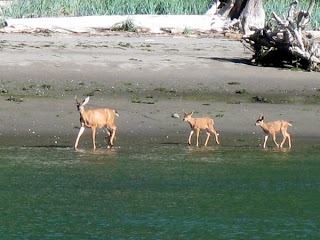 We had called ahead to the harbormaster and found the slip we could use for a few hours, to pick up our friends and make a trip to the hardware store.  After all was loaded we made our way to nearby Cypress Island.  The first night was gorgeous, and we spotted this classic boat dropping crab pots, with Mt Baker in the background. 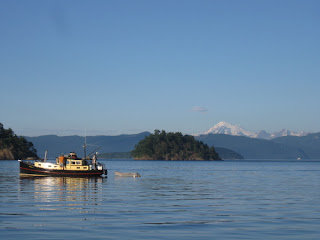 The next morning we listened to the weather report, which said gale winds were to be expected beginning at 11.  Since our plan HAD been to head for the northern Boundary Islands of Matia, Sucia and Patos, all three rather remote and exposed, we decided we would just wait out the weather where we were.  The wind and rain began right on schedule, and ended the same around 4 PM.  Winds were sustained at 20 mph with gusts to 30.  It has been four years since we had all been together, so the time was spent catching up and getting reacquainted.

The next day we arrived at Sucia (Matia was 'full') and were lucky enough to get space on the dock!  Fellow boaters told of their previous day's two-hour trip that took 5 hours and tossed them alot and all aboard were stricken with sea-sickness.  This confirmed our decision to stay at Cypress!


From Sucia, we went to Stuart Island, setting the anchor in Prevost Harbor.  This was our BIG activity day with a round-trip hike of six miles.  We visited the Stuart Island School and Museum, and the Turnpoint Lighthouse and keeper's quarters, again with an excellent museum.  We were hoping to see orca whales at some point, but have not been so lucky this trip.

From Stuart Island we went to Roche Harbor, dropping two crab pots outside the entrance to the harbor.  After 'cheeseburgers in paradise' to celebrate Tim's birthday, ice cream for dessert, and a stop at the store, we were on our way back to check the pots.  The first had seven, but all either females or juveniles.  The second had four....one a keeper! 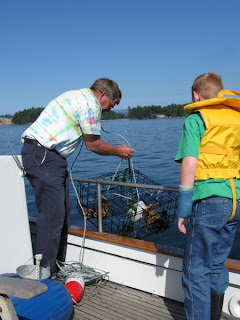 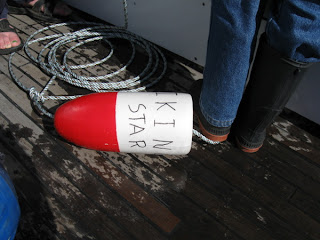 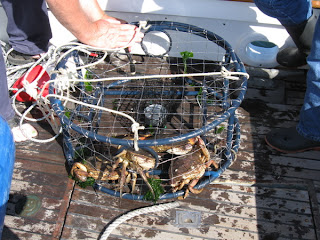 We hoped to land at Jones Island to hike and visit the deer, but the North Cove was full and we didn't care to try the South Cove with southerly winds.  On we went to Blind Bay on Shaw Island, again dropping the crab pots before picking up a state park mooring buoy for the night.  An overnight soak yielded four more keepers, more than enough for our Friday night dinner for the seafood eaters (I had a chicken-mango sausage, thank you).

We spent our last night with the Youngs again at Cypress Island, this time off Pelican Beach.  It is a bit roll-y with the summer boat traffic, but we all seem to tolerate it well.

We made it to Anacortes before noon where our friends loaned us their vehicle for reprovisioning and a trip to the marine store.  Thank you Tim, Marla, and Craig, for a great week!

After a pump-out and refueling, we are again at Pelican Beach.  We looked at Eagle Harbor on the way, but it was quite crowded, maybe twice as many boats as when we were having the weather.  As we arrived at Pelican Beach and began debating the best spot for anchoring, a boat left the buoy that was closest to us!  Wow!  We may stay here for two nights, resting and discussing plans for the next month or so.
Posted by Viking Star at 6:42 PM