Start With a Smile 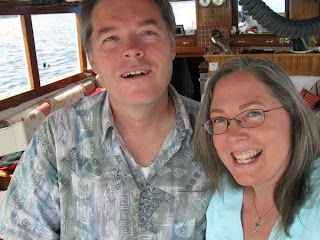 Yesterday, the happiest moment of the day!  Heading out again.  The water is calm, the sun is shining.  I thought it would be fun to take a picture of the two of us, partly to show how skinny we are becoming.
'We'll go to Port Angeles, stop and go get groceries, then go on to Sequim Bay for the night, maybe stay there a couple of nights.'  It's 50 miles to Port Angeles, and 20 miles further to Sequim.  Al's phone call was two hours later on the schedule than I thought.  We didn't leave Neah Bay until noon.
About 4:00 I realize, we are only just over half way to Port Angeles.  We have been travelling with the wind and making fairly good time, but now the winds have come up, which means the waves are bigger too, and the tide is turning to ebb.  It's getting kind of uncomfortable on this huge body of water called the Strait of Juan de Fuca (13.5 miles across!)  We are now making 5 knots over ground--it will take another 4 hours to Port Angeles.
We give up on Sequim, and even think we won't get groceries until morning.  Viking Star likes to roll quite a bit, but a couple of swells jerk us so that the water pitcher falls off the counter.  We had relaxed, a bit, on the everything off the counter rule.  Nothing broken, but water on the cork floor is pretty slippery.  Wipe up what you can and stay off it.
I'm pretty grumpy.  It starts to rain.  I'm tired.  I'm hungry.  It's getting dark.  I put on my rain gear and head onto the deck as we approach the pier, and I can't open the door.  And I break a nail.  And Al wonders why I am 'pissy'.
We DID get groceries, walking the 4 blocks to a Safeway.  I look forward to a spinach and mushroom scramble for breakfast.  A SALAD and curry chicken pita sandwich for lunch.  Steak for dinner?
We listened to the weather report this morning, and remember when traveling previously in the San Juans, it is advisable to get to where you want to go early in the day.  Winds pick up in the afternoons, and it can become uncomfortable quickly.  There is a small craft advisory for this afternoon (we were on the Strait in one yesterday).  It is supposed to be nicer tomorrow, so we will stay here for another day.
Yay!  Get off the boat, walk a bit!  Stretch the calf muscle (yeah, just one) that has been all tight and crampy. Start the day with a smile, and hope it ends with another one this time.
Posted by Viking Star at 1:48 PM