Several years ago I added the 2nd alternator to the main motor dedicating it to the House Battery.  The following is what I had written and posted at Boatdiesel.com , with some updated information / part numbers.

The DC electrical design on Viking Star has two 100% separate and complete systems: Engine starting / gauges, and the rest. The motor mounted alternator retains it duties of charging the starter battery, while a Leece Neville 270A alternator takes the house battery role. Attached are some picture of the final design I used.

First I went to Cummins and secured an additional pulley for the front of the motor. In this case I used dual V type pulleys, but they have a very wide verity from multi V belts to the flat ‘serpentine’ style, as well as any needed spacers. (I used Cummins option number: AF-9026)   I purchased the accompanying alternator pulley from a local supply house, along with a non-directional fan as the alternator would be spinning ‘backwards’. (No problem with this, but do need the correct fan  A041075594 / 75594??)  make sure it does not have a directional arrow cast into it and that the 'fins' are straight).  Using a external Brush Holder Cover from Leece Neville (part number:  39-5204,  100265, or A038100265S) allows for an external regulator to be connected.

I then used an inverted 4” U channel across the front of the engine. This fit the mounting holes on the bottom of the alternator. By boring ½” holes through the flanges and running a 5” bolt through the lower alternator ears and the holes in the u-channel flanges I could attach the bottom of the alternator. A simple 3/8” x 4” steel strap was bolted to the middle of the U Channel, this provided a riser where I could add the arched top mount for the alternator. (BTW:  The top arch mount can be found for little cost or even free at a local Truck junk yard) 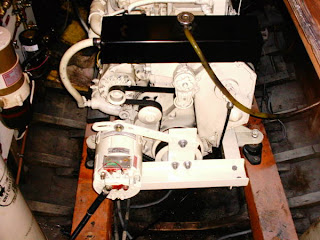 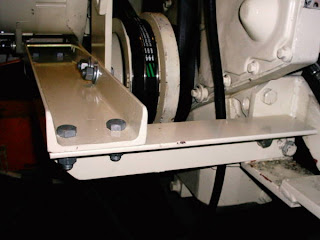 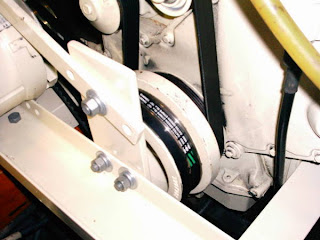 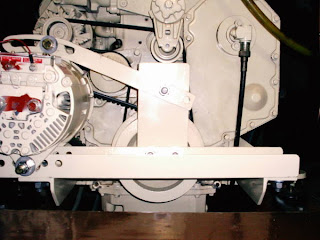 Total cost, less than $100 for all but the alternator. Tools: Grinder and grinding wheel, skill saw with a metal abrasion cutting blade, drill press. Changes: I note a slight bit more vibration when placing my hand on the new bracket than the motor. If I did it again, would increase the dimensions of the angle iron. Or perhaps add a stiffener to the existing size. (I was limited somewhat by readily available materials).  Note:  I had written this  5+ years ago, and to date have not made any changes.  It works very well and has shown no signs of stress or other issues.