House of the Lord


Stupidity is often painful, and I just did something really stupid. Tried to go down the stairs to the aft cabin, but the stairs were removed to change the engine oil. I may get a fat ankle out of this...


Yeah, the ankle is a little fatter today, and it is blooming into a pretty picture (I'll give it another day or so). It COULD have been a so much worse outcome! It is basically a 3-4 foot drop straight into the engine compartment, and would have been even further if I hadn't stepped onto the oil can. Basically jammed the ankle, skinned the opposite knee, and my neck and shoulders are a bit sore today too.


It was bad enough yesterday that I was questioning whether I would be able to follow through on our plans to attend church this morning.  Regular readers will know that I have been missing church. So this morning when the ibuprofen kicked in, we started out real slow.  We allowed over an hour to go what I believe is about a mile, starting with those 75 steps! We made it in PLENTY of time! 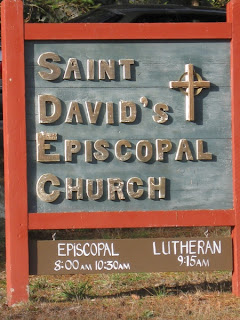 This is a busy building! THREE services held here on Sunday mornings, and a day school during the week.


And here you can see what I mean about 'House of the Lord': 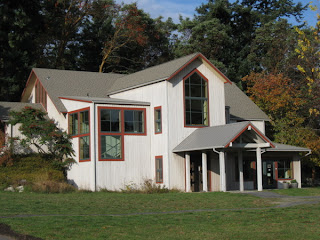 The building had an extensive remodel in 2008, which transformed it from a more 'traditional' church building to this much more 'home' looking structure. The sanctuary features gorgeous windows, upholstered chairs rather than pews,  warm woods, and brass adornments on the altar. The people were very friendly and welcoming, especially at the fellowship after service, a harvest celebration featuring apples!  AND we saw a 'familiar face'--Carolyn Haugen, secretary of the local Power Squadron, whose meeting we attended last Thursday.
After church we hobbled to the store, passing the Catholic Church, which I also photographed because it reminds me so of my childhood country church: 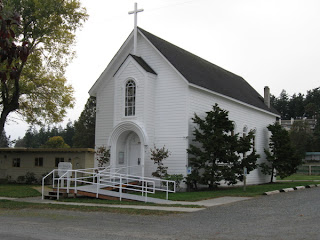 I was happy to return to the boat for another dose of ibuprofen.  Tomorrow should be the worst of it, the second day usually is. Then my ankle will probably look much worse than it feels!
Posted by Viking Star at 4:52 PM