We woke up this morning, excited to get underway to Eagle Harbor on Bainbridge Island.  We were planning to go to our very favorite coffeeshop of all time, Pegasus Coffee.  Also on the schedule, pizza by the slice, provisioning, and the best ice cream ever at Mora Iced Creamery.

However, once we were out of the harbor at Blake Island, we encountered excitement of a different sort!

It started when Al asked 'What are those fast, black boats over there?'  I got the binoculars and took a peek while Al was setting up the radio to monitor Channel 13 - the commercial traffic, and Channel 14, - Seattle Traffic, as well as 16 - the International Hailing channel,  simultaneously.  'It looks like some sort of Navy tugs to me.'  Looking at the AIS readings on the chart plotter, we could now see that these were Navy tugs.

'Something big is coming in,' Al said.  And then he pulled down the binoculars and says 'I see an aircraft carrier!'

Should we be excited, or concerned, that we will be in the middle of this?  Well, YES, because our current course and speed will put is RIGHT in the middle of it!  Thank you AIS.  Al is able to call the control tug and ask advice as to where they would like us to go.  They direct us to go between the group of tugs hanging out at Restoration Point on Bainbridge Island and the VTS (shipping) lanes.


Soon a Coast Guard boat approached us with his lights flashing.  We opened our door to talk, and were instructed to give the carrier a wide berth, and to NOT point our bow toward it. (Do YOU note the mounted machine gun on the bow?  We did, though it likely was the least lethal weapon around.).  We told them of our intention to head for Eagle Harbor, and that we would be ducking behind the small island ahead as the carrier passed. 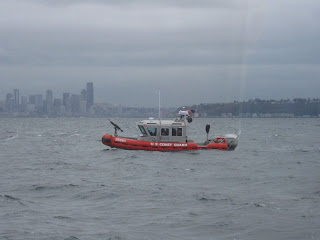 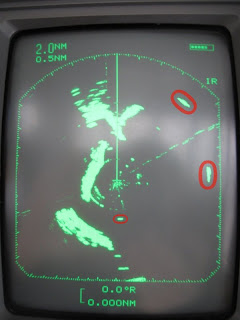 I wondered how it would appear on Radar.  This is the largest warship in the world with a flight deck covering over 4 acres!  Al snapped this photo - see the blip on the upper right hand corner?  Nope, that is a Canadian escort ship.   The one straight out on the right hand side of the screen?  Again no, that is just a tug and barge.  CVN-74 is actually that small one directly behind us.

I was amazed how SMALL it looked, knowing air craft carriers hold a crew of THOUSANDS.  And this was perhaps one of the best returns we got (often it would completely fade from the screen).    Here are some of the websites Al investigated and learned much!

Some news articles about her arrival.   Take note:  THIS is the same ship that rescued an Iranian fishing vessel from pirates 4 days after being told by a rather excited Iranian government to 'Go Home and Never Come Back or Else' !


Even more exciting to me -- my Navy son is presently in power school and hopes to be assigned to an aircraft carrier.  In just over a year or so, he could be travelling the world in this style!  Go Micah!