Returning to 'the Islands'

We left Friday Harbor on February 8th and worked our way south to Seattle and Blake Island and back up to hang out between Deception Pass and Anacortes for some time.  Other than Al's quick pass by James Island while I was gone (the docks had not yet be replaced since removal for winter), today is the first time we have entered the San Juan Islands in nearly two months! 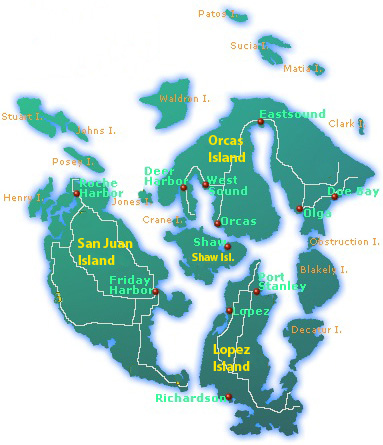 We spent the last two nights in Anacortes, reprovisioning and waiting for gale winds to abate.  There is also a Salmon Derby at Anacortes this weekend, and Cap Sante would be needing us to clear out today.

Winds calmed greatly to below 20 mph in the morning, so we were off by 1 PM.  We were bound for Blind Bay on Shaw Island, at the center of the San Juan Islands.  We anticipated that crossing Rosario Strait could still be a bit uncomfortable, preparing ourselves and the boat appropriately.  Remove anything that can slide off the table, counter, or dash.  Secure the doors to the other cabins.  Take off clogs and put on 'real shoes'.

Though there were no white caps to speak of, the waters were a little bumpy.  It was more swells than waves, but coming at us straight on.  We 'hobby-horsed' for awhile, and I realized it wasn't very comfortable for someone at the end of a sinus cold.  The bottom of the trough increased the pressure in my face significantly, so I took another dose of decongestant.  Though the waves didn't come over the bow, there were a few that were getting pretty close!

After a period of travelling into the waves, we came into Rosario Strait below Cypress Island, and Al turned a bit more northward to offset the current of the ebb.  This took us over the waves on the quarter, a bit more comfortable, lengthening the period between crests.  However, from this perspective, they seemed even bigger!

Now, you know I do not like 'bumpy' water.  I know the boat and captain are very capable.  But this does not stop a certain level of anxiety for me in these situations.  Here are some of my thoughts as we crossed Rosario Strait today:

Oh God.  These are pretty big.  And we really aren't into the Strait yet.  Hold on.  Focus on that spot, don't look at the waves.  We're turning?  Why?!  Oh, this IS better.  Huh.  Okay.  Boy, am I glad we aren't SIDEWAYS to this!  That's at LEAST five feet.  My heart is beating hard and fast.  Take a deep breath.  That's better.  Don't look at the waves.  Well that means I am not looking forward to help watch for hazards.  But I am taking care of myself.  That's important too.  Go faster!  Why are you slowing down?  There's a ferry coming?  I'm not looking -- I need to focus on that spot on the horizon.  Yay, it's getting calmer -- can I go pee now?

Once off the Strait and into Thatcher Pass, things went very well.  We had intended to anchor in the south end of Blind Bay, but the shallows have been bombarded with crab pots.  We picked up our favorite mooring buoy off Blind Island instead.  It feels a lot like coming home.

We were surprised to see the ferry Elwha in the dry dock at Anacortes!  Al will have to do some research to find out what has happened.  I think we mentioned that it was at Bainbridge Island when we were there too.  What has this 'problem child' been up to?  The ferry mentioned in the above thought ramble was Yakima.  Salish has been doing the inter-island loop; we have not seen here in the San Juans before.  We haven't seen Sealth or Evergreen State yet.
Posted by Viking Star at 5:24 PM