Last week we anchored in Clam Bay, on the east side of where Penelakut (formerly Kuper) and Thetis Islands meet.

Our first evening there, we noticed a canoe in the anchorage.  Soon he was at our boat, and wondering if we would like to buy a woodcarving.  I have admired the native art we see in the Puget Sound/Salish Sea, and have previously purchased a pair of coffee mugs, and a blanket.

My eye is immediately drawn to the biggest piece, an Orca whale.  There are also two poses of hummingbirds, and a quarter moon.  His asking price is just a little higher than I had hoped, but to get a piece from the artist himself counts a lot too!  He signs and dates the back, and makes a dot to indicate where to attach something to hang it with, recommending velcro tabs. 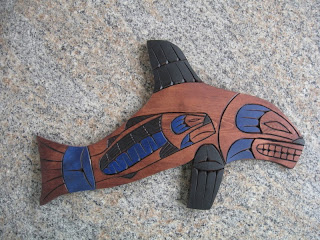 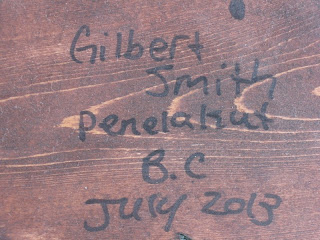 We learned that Penelakut is pronounced Puh-NEL- a -kut. We had a nice conversation with Gilbert, talking about local history. He mentioned two books that we will be looking for, 'Two Houses Half Buried in Sand' and 'Terror of the Coast'.  He invited us to meet him at the beach on the spit on Friday night.  We told him how we had learned earlier that it is polite to visit this First Nation island only with an invitation.  He said if anyone asked, to tell them that we were meeting him there.

We had a walk on the spit, and were sitting on a bit of dock, when a car came alongside and a young couple with a puppy got out.  We struck up a conversation, and when we told them we were waiting for Gilbert, she said 'He's my stepfather!'  So we got to know a bit of the family too.  When Gil arrived, he sent his stepdaughter back to the house to fetch his copy of 'Two Houses Half Buried in Sand' for us to look at, so we would know what to look for.  It has many historical stories about Penelakut.

Gil says that Penelakut used to be named Kuper Island, and it and neighbor Thetis Island were named for one man, Kuper Thetis.  Penelakut is the name of their tribe.

We will be happy to stop at Penelakut and look up Gilbert again when we move south in the fall!