While Al is away, Kristi will play!

I have been checking out various coffee shops on Bainbridge and Pegasus remains at the top of the list.  The Bainbridge Bakery had a good latte and a tasty quiche. They did a brisk business with the largest seating of all the shops I have been to here, and more seating outside.  Yesterday I  lunched at the Blackbird Bakery.  Their case was nearly emptied of baked goods, so they must be good! I had a generous slice of another quiche, and a tasty latte, but seating was limited and very crowded.  There IS additional seating in the courtyard of many other businesses, but it was raining heavily, and the wind gusts were quite cold.

Pegasus!  Perhaps I am influenced by the mere convenience to the marina, but the atmosphere is warm, even though the fireplace has remained unlit.  They have a gourmet kitchen that serves MEALS featuring local produce and meats.

On Monday I took the ferry across to Seattle.  The Pike Street Market was busy, as usual.  I got some mini-donuts and a Starbucks Chai tea latte, as usual.  I bought a couple of small scarfs, suitable for neckware, or even hair or purse decoration, and I bought a dahlia bouquet. 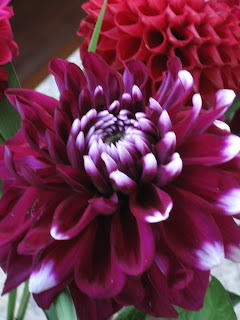 I resisted making any purchases at Macy's, but did get a head and shoulder massage and a haircut from David at Milagro's, an Aveda salon.  He took 2-3 inches off the length to help even up some of the layers, and I walked out with shiny, bouncy hair.
On the ferry ride back to Bainbridge, I noticed the Adventuress was out for a sail.  It had come into Eagle Harbor on Sunday evening and unloaded a large group of passengers. On last night's news there was a story about a 'last chance' school with students out for a cruise.  Perhaps that is what was going on Monday! 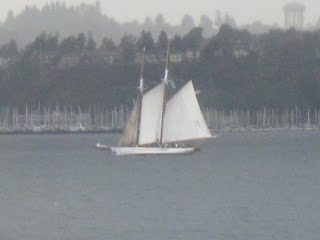 Yesterday I went to the local branch of the Kitsap Regiional Library and attended a class on downloading ebooks and audiobooks from the library.  There were about 30 people in attendance, larger than I expected.  I learned a bit, but was unable to participate in the hands-on portion because I do not have a KRL card.  When we get settled at Friday Harbor I was planning  to volunteer at the library there, and will get a card then.  OR perhaps Al can use his Multnomah county library card and download from them in the meantime.
Still, I hit the jackpot at the marina 'take one, leave one' shelf.  Sshhhh, I took TWO, but left three.  And the Eagle Harbor Book Co has  used books in their downstairs.  There are LOTS of authors who live on Bainbridge!  I got another David Guterson book, and learned that there is a new one coming out. Al just re-read Snow Falling on Cedars last month. (http://www.kitsapsun.com/news/2008/jun/01/personal-history-informs-david-gutersons-newest/)  I left the store with three books, telling the clerk I needed to leave quickly before I found MORE.
This afternoon I plan to do boat chores.  Laundry, make up the bed with winter clothes, sort a box, haul out garbage.  More work, less play today.
Posted by Viking Star at 11:51 AM