Yesterday we walked the perimeter of Blake Island. We had been told it was 'flat' and 4 miles.  But there were a couple of slopes that had us huffing and puffing. We packed a snack and found a picnic table at about the half-way point. We encountered more deer, a few slugs, and a couple of fuzzy caterpillars. 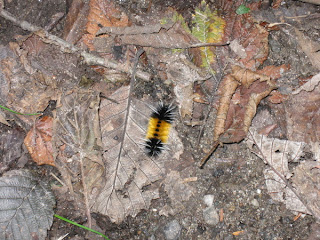 We also took a few moments to enjoy the view east to downtown Seattle.  There was a convenient bench well placed at a gap in the trees. 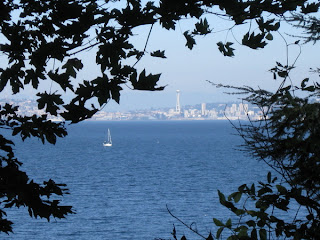 Last night we enjoyed a fire with camp hosts Robert and Jan.  In an earlier conversation with Ranger Paul we learned that there is a need for more participants in the camp host program.  We have been observing Robert and Jan, and picking their brains about the program. Al has been to the website and downloaded the applications.
Posted by Viking Star at 9:03 AM