We have spent the last day and a half holding up at Deception Pass State Park, waiting for weather that didn't live up to it's forecast. Not complaining!

But today the forecast is for calm winds and we are heading out Deception Pass, notorious for strong fast currents, into the sea where the Strait of Juan de Fuca and Rosario Strait join. 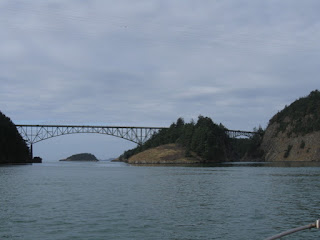 The biggest waves we have to handle come from the wake of the Gulf Reliance, an Integrated Tug Barge, bound for Port Angeles.
It is five miles across to Lopez Pass, into Lopez Sound, more new water for us. It is a peaceful day. 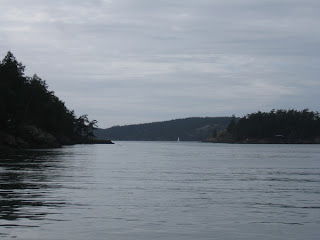 Though we visited Spencer Spit several years ago, we have never been by in Viking Star.  Here, we are approaching, travelling north.  Spencer Spit reaches a LONG ways toward Frost Island. Gulls have gathered on the land, and waves are breaking to the right....evidence of shallow water! 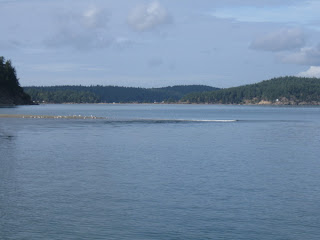