Just before Christmas we visited the Mystical Mermaid here in Friday Harbor.  The young couple that owns and operates the store are very friendly, and when we stopped in, we realized we had actually become acquainted with Rebekah the day before at the grocery store!

Anyway, we were there for their grand re-opening, after they moved their shop into a new location on String Street.  They have a carved wood mermaid out front, and they were soliciting ideas to name her.  I asked Al what he thought he name was, and he answered immediately 'Wanda!'  I asked why, and he said, because of the Strait of Juan de Fuca.

Ha ha!  I thought it should be spelled Wanda, but Al and Brian and Rebekah all thought Juanda was the way to go.  Al won a $50 gift certificate for his idea!

The other day we finally had the camera along on a nice day, so we stopped for a photo or two. 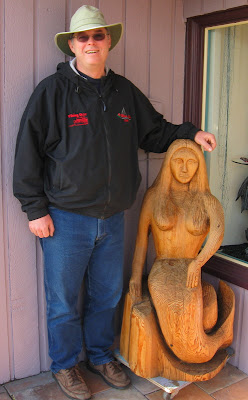 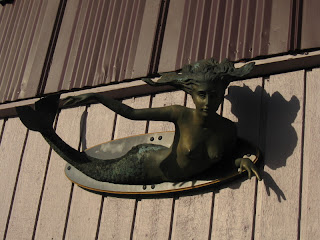 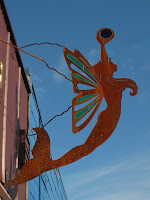