One of the greatest pleasures of our holiday trip to the Portland area was seeing my son for the first time since he left for Navy basic training last April.

During that time he did complete that basic training, he turned 21 and 'officially' became a man, and he has done well on his first session of schooling in the Nuke program, earning the rank of Petty Officer.

Can you tell I am a proud mama? 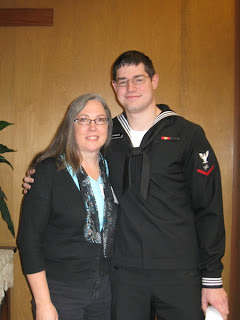 It was fun to hear stories of his earning the nickname 'Hello Kitty' from his instructor.  And how he enjoys teaching what he has learned, which helps him learn so much more.

It really does a mother's heart good to hear of another woman who gave up a first class airline seat for my son.  And to hear that on another flight Micah sat next to a 9-year-old girl who reminded him of his sisters, because she was picking on her little brother, and that she and Micah took turns playing on her DS game system.


Mamas, don't let your babies grow up to be cowboys.  But it is looking like the Navy is a good place for my son to be.
Posted by Viking Star at 6:50 PM