We had been told to watch for this flag. 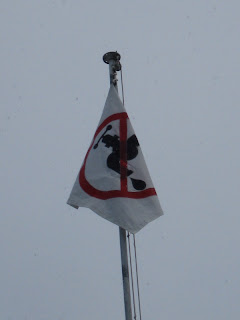 Friday Harbor has been having snow showers off and on since Sunday morning.  It has been beautiful.  Mostly there has not been much accumulation, and it has remained slushy, thawing off in the afternoon sunshine.  However, as soon as that sun dips below the hills, the wetness freezes once again and becomes treacherous.

We had heard that the Port listens to the forecast for Victoria BC, and when that forecast calls for an extended time of below 28 degrees F, they would raise the flag that indicates water would be shut off on the docks.  Today the flag went up!

We had filled our tank yesterday, even though we still were half full, not wanting to get surprised.  And when Al first turned the valve, water only trickled to start with -- it was partially frozen already.  So we are glad we topped off when we did!
Posted by Viking Star at 4:42 PM