There's a New Kid in Town!

Last Saturday morning, when the Washington State Ferry Sealth pulled away from the dock in Friday Harbor, she revealed another ferry at the secondary dock that we didn't recognize!

She is one of the newest ferries in the Washington State Ferry system, launched just over a year ago.  Based on a design from back east but built locally, her class has earned the nick-name Eileen (I-Lean) due to the unusual non-symmetrical design resulting in a built in 1 degree list.  Loading takes care of that.

We would not normally see this ferry here in the islands, but last Friday Yakima had some unexpected issues and was suddenly taken out of service.  Evergreen State (one of the oldest ferries in the service) was shifted over to cover for Yakima and  Chetzemoka was moved up to take Evergreen's inter-island route.

For those who are interested, here is the 'official' Washington State site: http://www.wsdot.wa.gov/ferries/vesselwatch/VesselDetail.aspx?vessel_id=65
And here is a great site with even more info!: http://www.evergreenfleet.com/Chetzemoka--2010.html


We have been anxious to take a ride on Chetzemoka, and on Tuesday, Al's regular work phone call closed up just in time for us to throw some snacks in the backpack and hotfoot it to the ferry dock.  The attendants asked as we boarded "Orcas?  Shaw? Lopez?"  and we said "Inter-island!  We want to take a tour!"  Their reply -- "You aren't the only ones!" 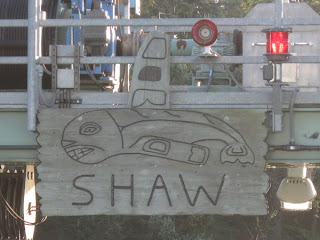