Tuesday was a day totally for relaxation.  Sleep in ... have coffee on board.  Al put up his blistered feet, and had an afternoon nap.

Yesterday was for fun.  We rode the ferry to Seattle and had breakfast at our favorite, Bacco Bistro.  I shopped for jeans, but didn't buy anything.  I got my hair cut by David Aguilar at Milagros -- he's great!  I've come back three times now, and you know that it's an effort to do that!  We picked up a few bottles of our favorite wines at Cost Plus, cruised through Pike Place Market, grabbed a drink at Starbucks, and boarded the 3PM ferry back to Bainbridge. 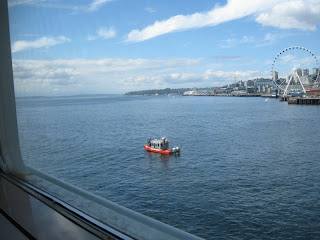 Whoa, they've got the gun on front .... and it's being manned!  It appears we have an escort.  What's going on? We've ridden the ferry lots of times and never seen them do this. 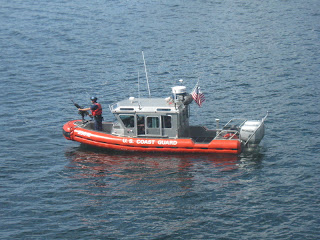 Then we get underway, and an announcement is made to the effect:  "Ladies and Gentleman, the presence of the Coast Guard boats you see is part of the safety presence they maintain in the Sound.  Their being here is routine, and is not cause for concern."

To which Al replied, "No, it is NOT routine; but no, I am not concerned."  We wondered "Is there someone special aboard?  Do armored trucks sometimes require escort?  What is the MARPOL status today?"

Then this morning we read the paper.  Something out of the ordinary WAS going on yesterday.  Secretary of Defense Leon Panetta was in Bremerton to address the sailors of the USS John C. Stennis, the aircraft carrier that we stumbled upon arriving back to home port last March 2.  He is sending the Stennis back to the Middle East, four months earlier than the previously scheduled January deployment to the western Pacific.  (These poor sailors had to have been looking forward to spending the holidays with their families!)

They leave on Monday.  We are in the neighborhood again.  We have guests coming for the weekend -- maybe we will have something special to show them!  And we will expect to see a VERY strong presence of the Coast Guard and other Navy ships as the Stennis departs.