Wow, it's been almost two weeks since we completed our third+ week of volunteering for Washington State Parks.  We had wanted to do a 'reflection' post after our time on Sucia Island last May, but we let the time slip away from us.  Better not make the same mistake this time.

Over all impression:  We are SO impressed with our Rangers!  They are so dedicated, and give so much more than they are compensated for.  So much so, that we fear for their long-term sustainability.

A big part of the reason we volunteered is because we know that the Parks' budgets have been cut drastically.  We use the parks extensively, and wanted to give back.  We did keep a time sheet of our hours donated.  But since we didn't keep copies,  we estimate it to total 350-400 hours between the two of us.

What did we do?  Basically, whatever we could, to make the Ranger's job easier.

Al's main duty at both islands was assisting arriving and departing boats, and checking that fees were paid.  He kept an eye on restroom cleanliness and refilled toilet paper dispensers.  He did a few maintenance projects, and even did some first aid.

My main duty was supporting Al, making sure he was fed and watered.  After that, I assisted where I could with docking.  AND I tended 'the store' on Blake Island.  I was told that before I was there, a good week's sales would be $50, and that the two weeks I was there totaled over $600!  Not to mention all the maps I handed out and questions I answered.

You never know what you might be asked to do as a Park Host.  Al once operated the park boat on a midnight transport of a person to jail.  Yes, Rangers do enforce laws!  Sadly, many involve alcohol.  Our role was merely to inform and advise.  And support the Rangers any way we could.

Other things we did:

And our time on Blake Island ended with a very sincere letter of appreciation from Ranger Joe: 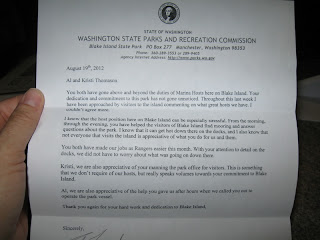 It was hard work, at times exhausting!  Would we do it again?  You bet.  We are not sure whether we will be able to with our plans to head a bit north next summer, but we would not hesitate if an opportunity presents itself.