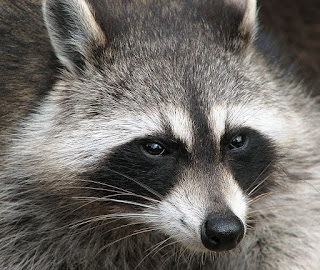 Last night, Al was gifted a live crab.  He decided to boil it up before going to bed.  I was tired and went ahead, though woke at 11:30 to find Al was still up, so I rolled over and went back to sleep.

Later I woke again.  It sounded like someone was in the main cabin, but Al was alongside me -- I used my elbow to make sure.

They (or it) came through the window over the stove that Al had considerately left open during the crab boil to help keep down the odor (I don't like seafood).  He cleaned the crab for later eating, and put the shell and bits into a zip-lock bag (more consideration for me) in the garbage.  THIS is what the raccoon was after.

Well, at least we have been able to watch a beautiful sunrise over Seattle.  The sun has just now cleared the horizon.  And I had a facebook chat with my son in the Navy, up early on the East Coast.
Posted by Viking Star at 6:07 AM