The Return of Chuck and Betty

Chuck and Betty joined us in Anacortes last October, after the crab season was over.  They said that this summer they wanted to be sure to visit for crabbing.  They were willing to come to wherever we were, at the end of August. 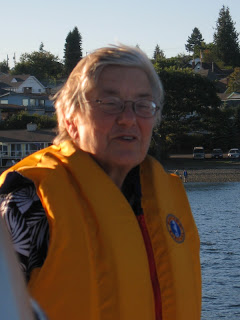 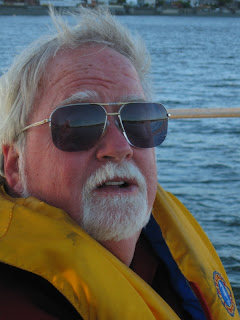 Since coming up to the mid-Sound, Al has been asking around for the best crabbing sites.  We had a couple of ideas ready when we picked up our guests in Bremerton last Friday.

But first, a special surprise!  The tall ships Lady Washington and Hawaiian Chieftain were in port.  We heard they were planning to take a sail in Rich Passage, so we hung around a little longer than we originally planned, and followed them out for an excellent photo opportunity! 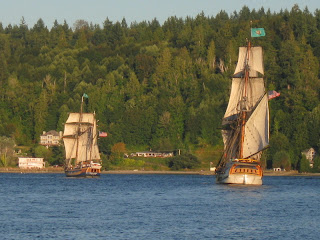 When we left the tall ships, we moved north on the Port Washington Narrows towards Dyes Inlet, but we stopped to anchor in Phinney Bay.  It was a peaceful evening, and we decided this would be a very well-protected anchorage.

Next morning we moved out to check the crab pots we had dropped the day before on the way to Bremerton.  The first had one enormous sun star in it.  Not likely to find crab in an area where there are a number of these, so we took the pot along to the area of the second one.  A bit more luck -- again a sun star, but one keeper crab and an under-sized one.  Both pots were re-baited and dropped again, and we moved on to Blake Island.

All mooring buoys were occupied on the west side, so we moved toward the marina at the main campground.  All dock space was filled (which we had expected).  So we got to try mooring between the piers for the first time.  It took several tries, but we got the bow secured, and moved back to fasten the stern.  Thankfully, the catamaran behind us deployed his dinghy and took our line around for us.

Al and Chuck got excited to see these aircraft flying over.  Osprey -- the new airplanes that take off like helicopters! 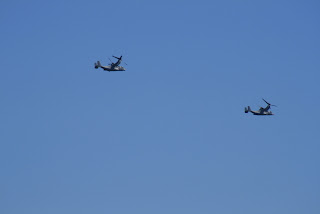 Mount Rainier and the moon help to make the sunset very pleasant.... 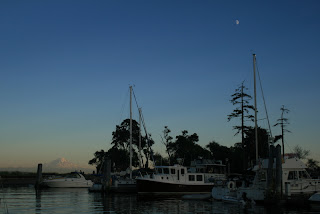