This has been a long time coming, but I have finally decided that indeed things have changed at Dickinson, and those changes are not good.  Our first experience with Dickinson was our beloved (and at times hated) diesel stove ( http://mvvikingstar.blogspot.com/2009/03/oh-warm-cabin-ala-thank-you-dickinson.html ).  This is a simple, robust, time-tested device, well suited for the marine environment.  It was with this in mind that I purchased a Dickinson BBQ sight unseen – I was basing my decision on the specs (dual independent burner, large size) and the reputation of the company.

When it arrived I was rather disappointed.  The Stainless Steel was thinner than I expected, giving an overall  cheap feel to the unit.  And things went down from there.  There are several inappropriate material choices, given the intended use in a marine environment.  Including not only aluminum and mild steel, but using miniature mild steel screws in direct contact with aluminum!  The workmanship was rough, with edges neither de-burred, nor rolled (I cut my hand a few times while doing routine cleaning of the grill until I de-burred the edges myself). 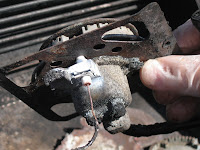 I had failures of the spark igniter– mostly around poor insulation and/or placeman of the wiring.  And there were just plain faults in the design / manufacturing – example: the drip tray that was just folded up metal leaving large gaps at each corner.  How it is a drip tray when it cannot hold drippings? Asking Dickinson for a replacement, and explaining the problem results in 1st a tray not for my BBQ, and then a tray that was for my BBQ.  But surprisingly, neither came with the corners sealed. (A dock mate kindly welded up these for me – which is what should have been done in the 1st place!)  And of course the cover – it is a shame today, but truth be told it started fading after 1 year while we were still under covered moorage.  In the PNW.


This mild-steel flame spreader plate burned out and I recently called Dickinson asking about a replacement.  I was told they did have one, it was $38.12 – but do not tell anyone how much they were charging for it.  Really?  Almost $40 for a part that should not have been in there in the beginning?  Side note:  Kristi and I spotted some stainless steel coasters in a coffee shop in Port Orchard.  They looked just like what I needed.  The Ikea label gave me a lead, how much do you suspect these stainless steel units could have cost me?  I suspect a bit less than $38.12, but then I would have had to peel off 3 rubber feet and drill a hole in the middle for a screw – so, guess it would have added up. . . .


It does not really matter as I already decided to pull out the inside of this BBQ and replace them.  A trip to Lowes resulted in a universal burner that was easily adapted to the existing valves.  And guess what, this burner is 100% stainless steel.  And more so, the replacement burner AND replacement flame shield (also made of stainless) cost under $25, tax included.   So for less than I would have paid for a replacement part, that should have never been there in the 1st place, I have a new complete Stainless steel inside!  And as a plus, this one puts out much more heat.  I can actually get a good brown on the steaks now!

Of course, I also noted a complete stainless steel BBQ at Lowes – a Master Forge portable unit.  About the same size as this Dickinson, though with only one burnder control.  It was $79, and I will tell you the build quality and workmanship was superior in every way to the unit I paid several hundred $$ for.


OK, so does this condemn Dickinson in whole?  Maybe not.

We also have a ‘heat robber’ on the diesel stove.  The fan in it failed after two years.  Not surprising as they had sourced a low cost sleeve bearing fan.  It was an easy replacement to put in a new fan – and to make sure I put in one which used ball-bearings this time. (side note:  Sleeve bearings have limited  orientation and are inappropriate for face down or face up deployments.   I am sure that accelerated the failure in our case.   But they do cost around $0.50 less to purchase then a longer life ball bearing unit!).   And then last winter the switch failed!  I am not sure I have EVER known a switch to fail when deployed in such light duty as this.

Then there is the time I ordered a replacement stainless steel stack to replace the one that blew away during one Christmas Ship run.  It arrived and I did not swap out the temporary galvanized one for several months.  When I did, I found that it was not the same brightly finished stainless used on the cap.  Not only did it not match the cap, but it has started to show signs of surface rusting after 1 year of use.

OK.  At one time in my life I worked for a large computer company where part of my job was interfacing with several Asian sources and manufacturers.  I know about making material choices, I know about metal stamping die quality choices and the need (or lack of) to do post die processes at times (ala de-burring).  I know the cost, MTBF, and other differences between a sleeve and ball bearing fan.  I have been in the industry long enough to see that Dickinson is making choices which are driven far too heavily by the $$$, and the resulting product they produce is reflecting it.  It is with this knowledge, and perhaps experiences, that I have decided Dickinson is TODAY a company that just does not work.  Though I would not hesitate to purchase any of their older offerings, I would be very hesitant to purchase any offering designed in the past 10 or so years.  And even with an older design, I would inspect them carefully, looking for ‘cost engineering’ choices that are rather inappropriate for a marine environment.

It is sad to me, as I can see how great Dickinson was at one time.  There are so few marine suppliers left who produced solid, robust, appropriate offerings.  It is really sad to see Dickinson fall off that very short list.