We left Quartermaster Harbor on Tuesday and went to Blake Island, despite a marine forecast calling for 15-20 knot winds and 3-4 foot waves.  I would perhaps have liked to stay another night, since they were supposed to diminish later Wednesday, but it turns out that was the best time to go.

We got to CRUNCH through the leaves on the trail on Blake Island!  Al noted how that is quite a rare occurrence here in the Pacific Northwest.

This morning, two boats left the harbor at Blake early, because they had heard the winds were going to build again throughout the day.  Yes, they are STILL blowing --

It's only just over an hour from Blake Island to Eagle Harbor on Bainbridge Island.  The waves are bigger than they were off the east side of Vashon the other day, when I said that it kinda wasn't very fun.  Those were only 2-4 feet with scattered whitecaps.  These are a solid 4 feet, with MANY whitecaps, and a few sneaky 5-footers.  Add in some ferry wake, and it's quite a ride for a girl who doesn't like bumpy water and has been spoiled on the South Sound all summer. 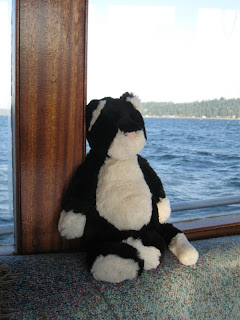 I warned Al that if Felix got jumpy, I was likely to also.

Al:   Maybe I should put some more beans in his butt.  (Felix has a mini beanbag butt to help him maintain his seat.)

Al:  I could always add a seatbelt for you.