Solar Panels on the Boat - Modeling and Performance


One of the challenges I had while deciding about installing solar panels on Viking Star was getting an idea of what to expect.  Asking around got a WIDE range of answers, from: “All I need”, to “Charges the batteries by 11am!”, to “Will not work at all in the rainy PNW”, to even “What a monumental waste of money solar is”.   Needless to say - no consensus.  More troubling was, without exception, none of the "inputs" were based on  ACTUAL data.   Even those who claimed ‘All I need’ were not able to tell me what their needs were – rendering their input useless to me.

I just could not go down a path blind.  I needed SOME idea on what to expect.  And so the old engineer in me emerged.  Solar system output is really a factor of four things:


(BTW, the following is the Long Path I took.  To see a shortcut, skip to the end of this blog post!)

Solar Radiation:  I located a local shore-based installation who had been tracking their results and who would send me their actual energy produced data.  Using this I was able to extract the solar radiation per month in this location covering not only seasonal variations (Summer vs.Winter), but also average cloud cover over a year period.

Size and Efficiency of panels and System:  This is easy.  Viking Star has two 240w panels  so a 480w system.  Completing the system is the MPPT controller I selected which has a conversion efficiency of 95%. Need to throw in some additional losses for the wiring voltage drop.

Orientation relative to the Sun:  Here is a point where installations on a boat differ greatly from shore-based ones.  While most shore installations are pointed due south and tilted towards the Sun (often at a compromise angle between peak output for summer vs. winter) panels of a boat are often placed flat.  (or some very small angle). Mounting flat is easiest.  While using a more complex mounting system and being able to point the panels towards the Sun can give significant output gains  – it also requires adjustments throughout the day as the Sun moves and as the boat swings around anchor.  (Shore-based installations do not need to deal with this swinging - hence they often just use fixed tilt mounts pointing due south)  I chose to mount Viking Star’s panels flat for two reasons: The panels are rather large - a tiltable mounting system would have to be very robust to securely handle them.  Plus I am just lazy.  I do not see myself climbing out several times a day ‘repositioning’ the panels as we swing around the anchor…

How much do we lose by mounting flat?  That depends on the time of year, as well as the latitude of the boat.   The actual formula is:

(Yes, those Celestial navigation skills come into play!).   Putting this all together we get  for 48 North:

During peak cruising months (April – September) the loss is relatively small  – 10-20%.  But this quickly increases as we get into winter where 60-70% of the potential output is ’lost’ due to mounting the panels flat. Combined with the much shorter days means during the winter we can expect little output from the solar system. Happily those are also the months we tend to be in port with shore power readily available.


Combining this loss table with the observed Solar Radiation derived from the shore based installation's production data,  I came up with the following modeled output for our system:


And here you can see the actual results so far: 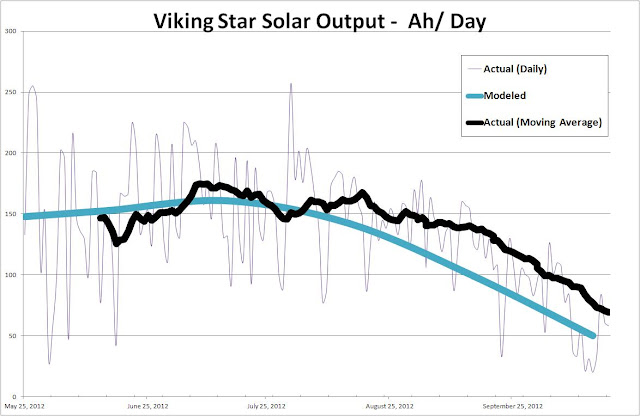 We have been tracking ahead of the predicted performance, but then this summer was one for the records books (literally).  Side note:  Those BIG dips to 50 or below the 1st month are the result of not attaching the remote voltage sensor to the MPPT controller.  See more here: http://mvvikingstar.blogspot.com/2012/06/controller-alternator-interaction.html


An easier way (the Shortcut)

If you too want to model output of solar panels you can follow the steps above (and I can send you .xls files with all the formulas, though you will need to locate someone near your cruising grounds that has reliable data from which you can start the assessment).   OR, you can just go to this site (which of course I found AFTER going through all the above - and I do wish they would stop changing the URL!!!):
http://pvwatts.nrel.gov/index.php

It not only has a large database of solar radiation throughout the world, but will also do the tilt (orientation) adjustments for you!  Start by entering approximately where you want to model.  Then on the the map click the specific solar data location you are interested in.  Click on the "Go To System Information" arrow on the right hand side and you can enter your system size as well as tilt angle.  A few notes:

This web page predicts 162Ah / day expected output from Viking Star's system in June.  A bit more than the 153Ah I modeled, but our actuals aboard Viking Star seem to be running ahead of modeled results.

The final issue is shading.  Here you need to get creative and try to minimize it.  The MPPT controller, combined with built-in bypass diodes in the panels will help a LOT with shading, but still shading will reduce output dramatically   During the peak summer months I noticed about a 30Ah reduction per day if we were docked pointing North as opposed to South, this I expect was due to the shadow from our mast when docked pointing north.  Just one more ‘consideration’ when pulling into dock now. . .

BTW:  There is a good argument for using a separate a MPPT controller for each panel installed on a boat, to help work around this partial shading situation.  Given that MPPT controllers are becoming more and more common, and the prices are dropping, doing so would be a good consideration for future installations.  But if you do use a single controller, like on Viking Star, make sure to wire the panels in SERIES to maximize output during partially shaded conditions.  And note this is a dramatic departure from what was recommended a few years ago (Parallel).  It is due to both the usage of the MPPT controller and increased presence of zoning / internal bypass diodes on modern large panels.  If connected parallel - a shaded panel will drop out entry  while if a modern panel is connected in series the partly shaded panel will lose the shaded segments, but the unshaded segments will continue to contribute (due to internal panel zoning and by-pass diodes).

Overall we are happy with the system.  It accomplished it's key goal: reduction of generator time.  It is only this last month we needed to start using the Generator, and that was just for covering the drying cycle during laundry.  Though as expected -  as we are heading into the latter part of October we are finding we need to put time on the generator, varying from day to day.