Well, we entered the San Juan Islands and made a bee-line for Blind Bay on Shaw Island, to tuck into a corner and hope predicted winds would just blow over us.  It worked!  We were snug and comfortable.

We worked on re-learning how to do nothing.  For Al, that was reviewing playing with the SSB and researching out energy usage over the past year, especially on his mind since we filled our tanks in Oak Harbor.

For me, doing 'nothing' included scrubbing the shower, doing a thorough vacuuming, and cleaning the iron stovetop with steel wool, and then oiling it.  Oh, and I read two and a half books.

Today, we moved to Fisherman Bay on Lopez Island.  The winds were a bit more than predicted, and the waves were about three feet tall.  That's nothing when we are heading straight into them, but when you have to turn broadside to enter a very narrow passage, it can get a bit tricky.

The broom and mop fell over. 'The Girls' were frightened from their perch.  Several books fell from my shelf.  And Lindsay's picture jumped from it's place.  Felix was tucked into the curve of the settee, so he was quite comfortable.

We took a spot in the marina, hooked up the power cord, and walked up to the office to take care of business.  We stepped over to the bar and had a burger for me, fish and chips for Al, a couple of drinks, and  observed a large boat break loose from it's anchorage and resort staff rushing down the docks and out in two boats to capture it.  We at first were afraid that two people we saw going out in a dinghy had somehow fallen in the water, but a local was present who recognized the boat and said that wasn't the case.

We decided to walk in to the village and had fun recalling our visit here in August 2011.  Many places were closed today (the fudge shop, the wine tasting room, the bakery) but we had coffee at Isabel's, and spent some time at the library.

We returned to the boat just as the sun set.  Fisherman Bay is NOT sheltered from the southwest winds.  The waves occasionally break onto the dock.  Our wind speed gauge says we got to 40 knots! 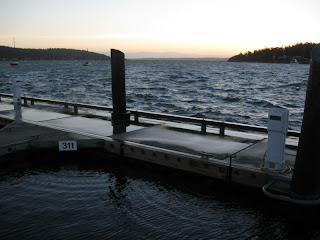 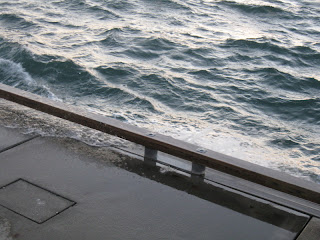 The docks are wet -- walk carefully.  And as I write, it is dark.  There is not much lighting on the docks, so we are IN for the night.

We REALLY like Lopez Village, but our visit here now reinforces that our decision to winter at Friday Harbor is the right one.
Posted by Viking Star at 8:49 PM